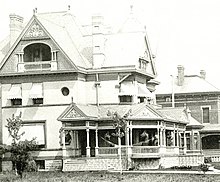 A Victorian Era sleeping porch seen on the top floor of a home in Toledo, Ohio, 1895

A sleeping porch is a deck or balcony, sometimes screened or otherwise enclosed with screened windows,[1] and furnished for sleeping in warmer months. They can be on ground level or on a higher storey and on any side of a home. A sleeping porch allows residents to sleep on a screened-in porch, avoiding warm convection currents from air and wall materials beneath or beside. Before affordable electric fans and/or air conditioning were installed, families often created such rooms, well-aired, where children would sleep during summer. The idea dates to around 1900 and became common in much of the United States.[2]

A better temperature for sleep can help with any illness (assisting the immune system). Such a room was once particularly favored year-round for treating tuberculosis, a respiratory-system illness which was the leading morbid factor before the BCG vaccine became available. Health experts correlated fresh air as a main prevention for many illnesses, rather than linking somewhat causal better sleep.[3]

Retrieved from "http://en.turkcewiki.org/w/index.php?title=Sleeping_porch&oldid=1065816543"
This website is a mirror of Wikipedia, and is not affiliated with the Wikimedia Foundation.
Categories:
Hidden categories: