Jump to navigation Jump to search
Large room used for meetings, social affairs or events
This article is about the meeting room. For the corridor, see Hallway. For the etymology of "hall", see Hall (concept). For other uses, see Hall (disambiguation).
"Meeting Hall" redirects here. For the building in Utah, see Meeting Hall (Beaver, Utah). 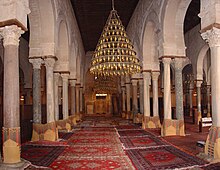 Prayer hall of the Great Mosque of Kairouan, in Kairouan, Tunisia 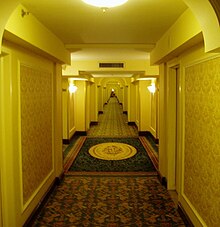 A corridor\hallway at the Royal York Hotel 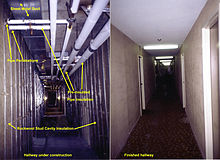 Corridor during and after construction in an apartment building in Mississauga, Ontario, Canada

In architecture, a hall is a relatively large space enclosed by a roof and walls.[1] In the Iron Age and early Middle Ages in northern Europe, a mead hall was where a lord and his retainers ate and also slept. Later in the Middle Ages, the great hall was the largest room in castles and large houses, and where the servants usually slept. As more complex house plans developed, the hall remained a large room for dancing and large feasts, often still with servants sleeping there. It was usually immediately inside the main door. In modern British houses, an entrance hall next to the front door remains an indispensable feature, even if it is essentially merely a corridor.

Today, the (entrance) hall of a house is the space next to the front door or vestibule leading to the rooms directly and/or indirectly. Where the hall inside the front door of a house is elongated, it may be called a passage, corridor (from Spanish corredor used in El Escorial and 100 years later in Castle Howard), or hallway.

In warmer climates the houses of the wealthy were often built around a courtyard, but in northern areas manors were built around a great hall. The hall was home to the hearth, and was where all the residents of the house would eat, work, and sleep. One common example of this form is the longhouse. Only particularly messy tasks would be done in separate rooms on the periphery of the hall.[2] Still today the term hall is often used to designate a country house such as a hall house, or specifically a Wealden hall house, and manor houses.

In later medieval Europe, the main room of a castle or manor house was the great hall. In a medieval building, the hall was where the fire was kept. As heating technology improved and a desire for privacy grew, tasks moved from the hall to other rooms. First the master of the house withdrew to private bedrooms and eating areas. Over time servants and children also moved to their own areas, while work projects were also given their own chambers leaving the hall for special functions. With time, its functions as dormitory, kitchen, parlour and so on were divided off to separate rooms or, in the case of the kitchen, a separate building.[2]

Until the early modern era that majority of the population lived in houses with a single room. In the 17th century even lower classes began to have a second room, with the main chamber being the hall and the secondary room the parlor. The hall and parlor house was found in England and was a fundamental, historical floor plan in parts of the United States from 1620 to 1860.[3]

In Europe as the wealthy embraced multiple rooms initially the common form was the enfilade, with rooms directly connecting to each other. In 1597 John Thorpe is the first recorded architect to replace multiple connected rooms with a rooms along a corridor each accessed by a separate door.[2] 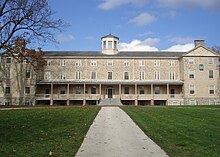 Many institutions and buildings at colleges and universities are formally titled "_______ Hall", typically being named after the person who endowed it, for example, King's Hall, Cambridge. Others, such as Lady Margaret Hall, Oxford, commemorate respected people. Between these in age, Nassau Hall at Princeton University began as the single building of the then college. In medieval origin, these were the halls in which the members of the university lived together during term time. In many cases, some aspect of this community remains.

Some of these institutions are titled "Hall" instead of "College" because at the time of their foundation they were not recognised as colleges (in some cases because their foundation predated the existence of colleges) and did not have the appropriate Royal Charter. Examples at the University of Oxford are:

In colleges of the universities of Oxford and Cambridge, the term "Hall" is also used for the dining hall for students, with High Table at one end for fellows. Typically, at "Formal Hall", gowns are worn for dinner during the evening, whereas for "informal Hall" they are not. The medieval collegiate dining hall, with a dais for the high table at the upper end and a screen passage at the lower end, is a modified or assimilated form of the Great hall.

A hall is also a building consisting largely of a principal room, that is rented out for meetings and social affairs. It may be privately or government-owned, such as a function hall owned by one company used for weddings and cotillions (organized and run by the same company on a contractual basis) or a community hall available for rent to anyone, such as a British village hall.

In religious architecture, as in Islamic architecture, the prayer hall is a large room dedicated to the practice of the worship.[4] (example : the prayer hall of the Great Mosque of Kairouan in Tunisia). A hall church is a church with nave and side aisles of approximately equal height.[5] Many churches have an associated church hall used for meetings and other events.

Following a line of similar development, in office buildings and larger buildings (theatres, cinemas etc.), the entrance hall is generally known as the foyer (the French for fireplace). The atrium, a name sometimes used in public buildings for the entrance hall, was the central courtyard of a Roman house.

In architecture, the term "double-loaded" describes corridors that connects to rooms on both sides. Conversely, a single-loaded corridor only has rooms on one side (and possible windows on the other). A blind corridor doesn't lead anywhere.

Retrieved from "http://en.turkcewiki.org/w/index.php?title=Hall&oldid=1065561904"
This website is a mirror of Wikipedia, and is not affiliated with the Wikimedia Foundation.
Categories:
Hidden categories: