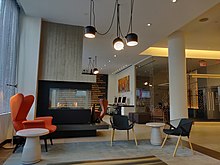 Lobby of a contemporary apartment building in Washington, D.C.

A lobby is a room in a building used for entry from the outside.[1] Sometimes referred to as a foyer, reception area or an entrance hall,[2] it is often a large room or complex of rooms (in a theatre, opera house, concert hall, showroom, cinema, etc.) adjacent to the auditorium. It may be a repose area for spectators, especially used before performance and during intermissions, but also as a place of celebrations or festivities after performance.

Since the mid-1980s, there has been a growing trend to think of lobbies as more than just ways to get from the door to the elevator but instead as social spaces and places of commerce.[3][4] Some research has even been done to develop scales to measure lobby atmosphere to improve hotel lobby design.[5] Many office buildings, hotels and skyscrapers go to great lengths to decorate their lobbies to create the right impression and convey an image.[6][7][8]

Portals:
Lobby (room) at Wikipedia's sister projects:
Retrieved from "http://en.turkcewiki.org/w/index.php?title=Lobby_(room)&oldid=1136831237"
This website is a mirror of Wikipedia, and is not affiliated with the Wikimedia Foundation.
Categories:
Hidden categories: