Jump to navigation Jump to search
Structure for storing vegetables, fruits, nuts or other foods
For the poem by the same name, see Root Cellar (poem). 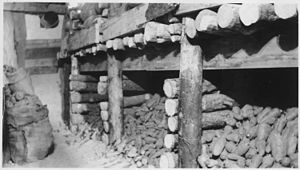 Interior of a large Wyoming root cellar with crops

A root cellar (American English), fruit cellar (Mid-Western American English) or earth cellar (British English) is a structure, usually underground[1] or partially underground,[1] used for storage of vegetables, fruits, nuts, or other foods. Its name reflects the traditional focus on root crops stored in an underground cellar, which is still often true; but the scope is wider, as a wide variety of foods can be stored for weeks to months, depending on the crop and conditions,[1] and the structure may not always be underground.[1]

Root cellaring has been vitally important in various eras and places for winter food supply. Although present-day food distribution systems and refrigeration have rendered root cellars unnecessary for many people, they remain important for those who value self-sufficiency, whether by economic necessity or by choice and for personal satisfaction. Thus, they are popular among diverse audiences, including gardeners, organic farmers, DIY fans, homesteaders, anyone seeking some emergency preparedness (most extensively, preppers), subsistence farmers, and enthusiasts of local food, slow food, heirloom plants, and traditional culture.

Root cellars are for keeping food supplies at controlled temperatures and steady humidity. Many crops keep longest just above freezing (32–35 °F (0–2 °C)) and at high humidity (90–95%),[1] but the optimal temperature and humidity ranges vary by crop,[1] and various crops keep well at temperatures further above near-freezing but below room temperature, which is usually 65–70 °F (18–21 °C). A few crops keep better in low humidity.[1] Root cellars keep food from freezing during the winter and keep food cool during the summer to prevent the spoiling and rotting of the roots, for example, potatoes, onions, garlic, carrots, parsnips, etc.. Typically, a variety of vegetables is placed in the root cellar in the autumn after harvesting. A secondary use for the root cellar is as a place to store wine, beer, or other homemade alcoholic beverages.

Separate cellars are occasionally used for storing fruits, such as apples.[1] Apples can give off enough ethylene gas to hasten the overripening or spoilage of other crops stored nearby,[1] although this effect is variable, and many farms successfully store vegetables without segregating their apples.[1] Water, bread, butter, milk, and cream are sometimes stored in the root cellar. Items such as salad greens, fresh meat, and jam pies are kept in the root cellar early in the day to keep cool until they are needed for supper.[3]

The ability of some vegetables and fruit to keep for months in favorable cellar conditions stems in part from the fact that they are not entirely inanimate even after picking.[1] Although they may no longer qualify as living, the plant cells continue to respire in some impaired but nonzero way,[1] resisting bacterial decomposition for a time. The effect can be compared to the way that cut flowers in a vase of water last much longer than cut flowers lying on a table: the flowers in the vase are not entirely dead yet and continue to respire. The analogy is not exact, but the high humidity that supports many cellared crops is involved in this residual respiration.

In some cases, plants are transplanted from the field to the soil floor of a cellar in autumn, and they then continue living in the cellar for months.[1] The fact that they cannot thrive or grow larger in the low-light, low-temperature conditions is not a problem; the only objective is to keep them alive instead of dead, thus warding off decomposition. This is a form of season extension in which the growing season is not extended but the harvest season is substantially extended.[4]

Closets, crawlspaces, garages, sheds, and attics have all been used successfully for storage of at least some kinds of crops. Even the space under a bed can store some crops (such as pumpkins) for several weeks.[1] Especially before rural electrification, farms with springhouses have often used them for root cellar duty (as well as milkhouse duty).

Most root cellars were built using stone, wood, mortar (cement), and sod. Newer ones may be made of concrete with sod on top.[3]

Historian Sean Cadigan writes, "Newfoundland and Labrador's climate and soil have not been conducive to agriculture, but outport isolation and poor incomes in the fishery have made supplementary farming crucial."[5] Growing enough vegetables to last the winter was imperative to the survival of Newfoundlanders in the past. Without refrigerators, root cellars were one of the few methods to preserve their bounty. The town of Elliston has so many of the structures, the town's motto is the "Root Cellar Capital of the World". Most people grew root vegetables: potatoes, carrots, turnip, cabbage and beets, while others grew a wider variety of vegetables in their gardens.[6] Architect Robert Mellin noted the following on root cellars during his research in Tilting, Fogo Island:

Root cellars are dark, damp, and quiet subterranean structures used for storing vegetables [such as] potatoes and turnips. They are heavy-timbered, gable-roof structures built with logs (or later, sometimes with concrete), covered with shingles made of birch bark to reduce moisture penetration, and then topped with a thick layer of sod held in place by a perimeter picket fence. This precaution keeps animals off the top of the cellar and helps to retain the cellar’s shape.[7]

Many Newfoundland and Labrador cellars use a two-door airlock-type system as a method of temperature regulation, as they allowed people ample time to enter the first door, shutting it behind them before entering the main portion of the root cellar.[8] Folklorist Crystal Braye notes in her study of Newfoundland root cellars:

There are two basic designs for cellar foundations: the double door ground level entrance and the hatched entrance. In the double door ground level entrance, a small porch separates the exterior door from the interior door. Designed to keep frost out, the exterior door is closed before opening the interior door to access the cellar. Hatched entrance cellars are similar in size and interior arrangement but are entered from above, most commonly through a hatch located in floor of a shed constructed on top of the foundation. While lacking the porch component, the intermediate space of the shed creates a frost barrier between the cellar and outdoors. In the less common example where there is no shed, an exterior cover was placed over an interior hinged hatch, leaving a gap between the cellar interior and the outdoors.[9]

Retrieved from "http://en.turkcewiki.org/w/index.php?title=Root_cellar&oldid=1116172122"
This website is a mirror of Wikipedia, and is not affiliated with the Wikimedia Foundation.
Categories:
Hidden categories: