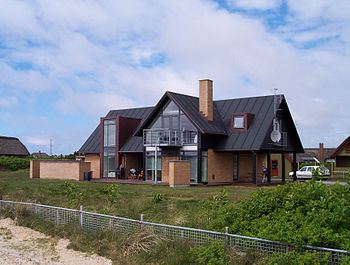 A single-family home in Denmark

A stand-alone house (also called a single-detached dwelling, detached residence or detached house) is a free-standing residential building. It is sometimes referred to as a single-family home, as opposed to a multi-family residential dwelling.

A single detached dwelling contains only one dwelling unit and is completely separated by open space on all sides from any other structure, except its own garage or shed.

A small detached house surrounded by a green yard in Haapamäki, Keuruu, Finland

The definition of this type of house may vary between legal jurisdictions or statistical agencies. The definition, however, generally includes two elements:

Most single-family homes are built on lots larger than the structure itself, adding an area surrounding the house, which is commonly called a yard in North American English or a garden in British English. Garages can also be found on most lots. Houses with an attached front entry garage that is closer to the street than any other part of the house is often derisively called a snout house. 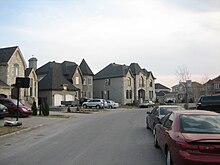 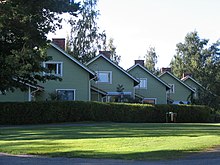 In the United Kingdom, the term single-family home is almost unknown, except through Internet exposure to US media. Whereas in the US, housing is commonly divided into "single-family homes", "multi-family dwellings", "condo/townhouse", etc., the primary division of residential property in British terminology is between "houses" (including "detached", "semi-detached", and "terraced" houses and bungalows) and "flats" (i.e., "apartments" or "condominiums" in American English).[citation needed] 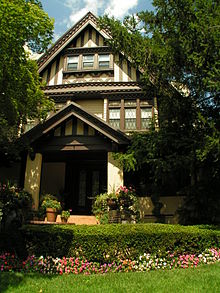 In pre-industrial societies, most people lived in multi-family dwellings for most of their lives. A child lived with their parents from birth until marriage, and then generally moved in with the parents of the man (patrilocal) or the woman (matrilocal), so that the grandparents could help raise the young children and so the middle generation could care for their aging parents. This type of arrangement also saved some of the effort and materials used for construction and, in colder climates, heating. If people had to move to a new place or were wealthy enough, they could build or buy a home for their own family, but this was not the norm.

The idea of a nuclear family living separately from their relatives as the norm is a relatively recent development related to rising living standards in North America and Europe during the early modern and modern eras. In the New World, where land was plentiful, settlement patterns were quite different from the close-knit villages of Europe, meaning many more people lived in large farms separated from their neighbors. This has produced a cultural preference in settler societies for privacy and space. A countervailing trend has been industrialization and urbanization, which has seen more and more people around the world move into multi-story apartment blocks. In the New World, this type of densification was halted and reversed following the Second World War when increased automobile ownership and cheaper building and heating costs produced suburbanization instead.

Single-family homes are now common in rural and suburban and even some urban areas across the New World and Europe, as well as wealthier enclaves within the Third World. They are most common in low-density, high-income regions. For example, in Canada, according to the 2006 census, 55.3% of the population lived in single-detached houses, but this varied substantially by region. In the city of Montreal, Quebec, Canada's second-most populous municipality, only 7.5% of the population lived in single-detached homes, while in the city of Calgary, the third-most populous, 57.8% did.[3] Note that this includes the "city limits" populations only, not the wider region. Culturally, single-family houses are associated with suburbanization in many parts of the world. Owning a home with a yard and a "white picket fence" is seen as a key component of the "American dream" (which also exists with variations in other parts of the world).[4]

In the 21st century, a lack of affordable housing, the climate change impacts of urban sprawl and car dependency, and concerns about racial inequality has increasingly led cities to abandon single-family housing in favor of higher-density homes.[4][5]

Wikimedia Commons has media related to Detached houses.
Retrieved from "http://en.turkcewiki.org/w/index.php?title=Single-family_detached_home&oldid=1135401436"
This website is a mirror of Wikipedia, and is not affiliated with the Wikimedia Foundation.
Categories:
Hidden categories: