Jump to content
Small play house, or play area, for children
This article is about the children's hideaway. For the film, see Cubbyhouse. For the mailbox, see pigeon-hole messagebox. For the New York bar, see Cubbyhole (lesbian bar).

Look up cubbyhole in Wiktionary, the free dictionary. 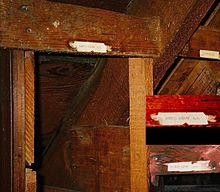 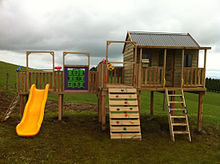 A cubby-hole, cubby-house or cubby is a small play house, or play area, for children.[2] This may be constructed by the children themselves and used as a place of play.[3] Autistic children can sometimes benefit from such places.[4] Children may have a small shed, play-house or tent which they use as a cubby-house.[5] Children might build their own in various places in the house or garden, or have a pre-fabricated cubby. An Australian fictional treatment of the quest for the perfect cubby can be found in Ursula Dubosarsky's The Cubby House, illustrated by Mitch Vane.[6]

In South Africa, cubby-hole or cubby is the word for a glove compartment in a vehicle. This usage is also common in Barbados, Zambia, Botswana and Zimbabwe, as well as parts of Southern Minnesota; Madison, South Dakota; and Northwest Wyoming.

In the UK, Ireland and Canada, it may refer to the cupboard under the stairs. In Quebec, the French word cagibi, which is a contraction of cage à bijoux, and roughly translates as "jewel case", is synonymous with a triangular storage walk-in located directly under the inner stairs of a house.

In the United States, a cubby-hole most often refers to a small square or rectangle-shaped space where children may keep their personal belongings, such as in a preschool or kindergarten setting. These cubby-holes are often constructed out of the same materials as bookshelves and have a similar appearance save for the division of the cubbies themselves.

Retrieved from "http://en.turkcewiki.org/w/index.php?title=Cubby-hole&oldid=1129115697"
This website is a mirror of Wikipedia, and is not affiliated with the Wikimedia Foundation.
Categories:
Hidden categories: