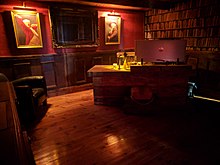 A man cave[1] or manspace,[2] and less commonly a manland or mantuary is a male retreat[3] or sanctuary[4] in a home, such as a specially equipped garage,[5] spare bedroom,[4] media room,[6] den,[7] basement,[7][8] or tree house.[9] The term "man cave" is a metaphor describing a room where one or more male family members and optionally their friends are supposed to be able to do as they please, without fear of upsetting any female household members with their interior design choices.[10] Paula Aymer of Tufts University calls it the "last bastion of masculinity".[10] The first known published use of the phrase is from March 21, 1992, in the Toronto Star by Joanne Lovering: "With his cave of solitude secured against wife intrusion by cold floors, musty smells and a few strategic cobwebs, he will stay down there for hours nestled in very manly magazines and open boxes of tools. Let's call the basement, man cave." [11] The phrase gained traction with the 1993 publication of Men Are from Mars, Women Are from Venus by John Gray.[12]

While a man's wife may have substantial authority over the rest of the house in terms of design and decoration, she often has no say in the look of a man's personal space.[10] Because, historically, the wife decided the decor of the home (due to the role of caring for the family and managing household affairs), a man cave is the only space where a man can express his creativity and sense of design.[10]

Man caves have multiple purposes: they are a place to be alone, to indulge in hobbies, and to hang out with male friends. It is, loosely, a male-only space to retreat to watch sports matches,[13][14] play video games,[15] or hang out with friends.[16] According to psychiatrist and author Scott Haltzman, it is important for a man to have a place to call his own, referring to a male area to which to retreat. Rules are relaxed; it is a place where other people's sensibilities about standards of cleanliness are not necessarily observed.[2]

In a sense, for married men, it is a way to recreate some of the space and freedom of their pad, frat house, or college dorm room, where people could come and go as if they owned the place.[2] It is where a man doesn't have to be on his best behavior, where no women are around, and is supposed to be able to relax.[2] Writer and handyman Sam Martin explained:

Men have had an identity problem since the women's movement. They have tried to figure out who they're supposed to be. For a while women wanted them to be more sensitive, so they were more sensitive. Then women wanted them to be more manly. One of the things I discovered is when men have their own manspace, what they put inside of it is really an expression of who they are. Manspace is about establishing an identity for a man. Our premise is that women have control of the look and the feel of the house and that left guys wanting more. Anybody who has a specific interest or hobby or work or collection is going to want a space to indulge that.

Martin thinks that any space in the house will do, even a lounge chair and a set of headphones, provided there's an agreement with one's wife or girlfriend that the space is under the control of the man.[17] The advantages of a self-contained room are that male-oriented design choices, such as tacky lamps and beer-can sculptures, are out of sight of women, but in a way that doesn't disturb female sensibilities since visitors generally don't visit the man cave.[17] Similar to a firehouse lounge room, but in the home.[18]

Sociologist Tristan Bridges has interviewed American men and their partners about their man caves. He found that many men rarely used their man caves. One man Bridges interviewed said "I feel like some day guys from my neighbourhood will congregate here after work and we'll share a beer and chat." When Bridges asked about who these guys were, the man replied "I don't know". Bridges says that his research has turned partly into 'a story about men's loneliness.[19]

According to several sources, the general architectural and design trend is for men to take traditionally male-only spaces, and enhance them with improvements and masculine aesthetic choices. Man caves can be equipped with accessories such as refrigerators,[5][20][21] vending machines,[6][20] putting greens, kegerators,[4] giant TVs,[4] musical instruments including gear such as microphone stands and amplifiers,[8][10] pool tables, boxing rings,[17] and entertainment centers. A man cave may also be fitted out with a bar and sports memorabilia such as trophies.[10][15] Fisherman for example can display their catches there.[22] In the book Where Men Hide which Publishers Weekly described as an affable but only “sometimes thought provoking” guide, author James Twitchell and photographer Ken Ross explore areas where men like to be alone.[23] According to Twitchell, some public male-only spaces, such as the barbershop, are declining, while other spaces are taking their places, and the author tries to show the attractions of the "grimy garage."[23] The book suggests that "men make their own spaces for good or ill", according to Publishers Weekly.[23] Twitchell focused on communal man cave spaces such as male-only groups in megachurches, possibly a modern-day replacement for declining attendance at male-only clubs such as Masonic lodges.[24] Twitchell noted that some anthropologists have speculated that these spots are a place for men to bond before hunting or war, and where they can "smoke or fart" and tell the "same jokes over and over again."[24]

One man redecorated the space to look like a replica model of the bridge of the Starship Enterprise from the TV show Star Trek,[17] while another man spent over 2 years and $120,000 to make his man cave into a Batcave.[25] Upscale sports-themed furnishings are also available to outfit a man cave.[6] These rooms are also often decorated by the male, with little or no female influence. The room may be large enough to accommodate a big screen television, often used for watching sports games with male friends.[10] If it is an area set off from the rest of the house, it may be possible to make noise, or yell at the television, without fear of reprisals from a wife, girlfriend or mother.[10]

Garages have typically been a man space since they're often lit by "harsh fluorescent bulbs" and lack heat or air conditioning but nevertheless present a guy with an "opportunity to disappear for hours while never leaving the premises."[2] There are some reports suggesting that some men are likely to "lavish time, money and attention on fixing this spot up".[2] Places in houses which have been typically associated with male-oriented chores, such as garages, basements and sheds which have not been "particularly welcoming spaces" when shared with storage items and garbage, are being fixed up to be more suitable as full-time living spaces, with more thought to design and planning.[17]

One man cave of a Gillette corporation executive has a desk, "a chess board that's always set up, never used".[10] But sometimes there are limits; his wife has not yet agreed to let him smoke cigars in it.[10]

Women have created similar spaces in which they can relax and pursue hobbies. These have been referred to as "she-sheds" and "girl-caves".[26] Some analysts have described the manosphere as an online counterpart to the man-cave.[27]

In the book by Sam Martin, entitled Manspace: A Primal Guide to Marking Your Territory, the author suggested there were several spots from pop culture:

Look up man cave in Wiktionary, the free dictionary.

Retrieved from "http://en.turkcewiki.org/w/index.php?title=Man_cave&oldid=1135809751"
This website is a mirror of Wikipedia, and is not affiliated with the Wikimedia Foundation.
Categories:
Hidden categories: