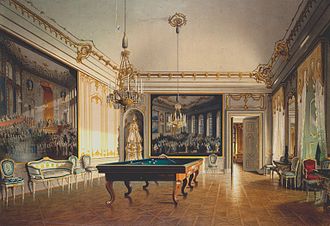 The Billiard Room at Schönbrunn Palace, c. 1855/1860, chromolithograph after a watercolour by Franz Heinrich

A billiard room (also billiards room, or more specifically pool room, snooker room) is a recreation room, such as in a house or recreation center, with a billiards, pool or snooker table. (The term "billiard room" or "pool room" may also be used for a business providing public billiards tables; see billiard hall.)

The billiard room may be in the public center of the house or the private areas of the house.[1]

Billiard rooms require proper lighting and clearances for game playing.[2] Although there are adjustable cue sticks on the market, 5 feet of clearance around the pool table is ideal.[2]

Interior designer Charlotte Moss believed that "a billiard room is synonymous with group dynamics. It's where you mix drinks and embark on a little friendly competition..."[3]

Billiards probably developed from one of the late-14th century or early-15th century lawn games in which players hit balls with sticks.[4] The earliest mention of pool as an indoor table game is in a 1470 inventory list of the accounts of King Louis XI of France.[4]

Following the French Revolution and the Napoleonic Wars, billiard rooms were added to some famous 18th-century cafés in Paris and other cities.[5]

Retrieved from "http://en.turkcewiki.org/w/index.php?title=Billiard_room&oldid=1115924616"
This website is a mirror of Wikipedia, and is not affiliated with the Wikimedia Foundation.
Categories:
Hidden categories: