In architecture, an overhang is a protruding structure that may provide protection for lower levels. Overhangs on two sides of Pennsylvania Dutch barns protect doors, windows, and other lower-level structures. Overhangs on all four sides of barns and larger, older farmhouses are common in Swiss architecture. An overhanging eave is the edge of a roof, protruding outwards from the side of the building, generally to provide weather protection. 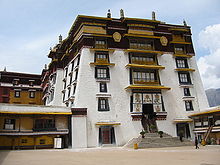 Overhangs on the White Palace in the Potala Palace complex—an example of Tibetan architecture from 1649.

In late-medieval and Renaissance Europe, the upper stories of timber-framed houses often overhung the story below, the overhang being called a "jetty". This technique declined by the beginning of the 18th century as building with brick or stone became common.[3]

By the 17th century, overhangs were one of the most common features of American colonial architecture in New England and Connecticut. This style featured an overhanging or jettied second story, which usually ran across the front of the house or sometimes around it; these dwellings were known as garrison houses. In the early 20th century, the style was adopted by Prairie School architecture and architects like Frank Lloyd Wright,[4] thus making its way into modern architecture.[5][6] An overhang may also refer to an awning or other protective elements.

Where eaves continue in the same plane over an ell (projection), this part of the roof is instead considered a catslide and if across a full façade the building may be a saltbox house.

Retrieved from "http://en.turkcewiki.org/w/index.php?title=Overhang_(architecture)&oldid=1094960655"
This website is a mirror of Wikipedia, and is not affiliated with the Wikimedia Foundation.
Categories:
Hidden categories: