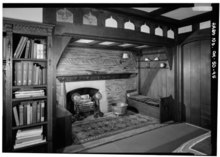 An inglenook or chimney corner is a recess that adjoins a fireplace. The word comes from "ingle", an old Scots word for a domestic fire (derived from the Gaelic aingeal), and "nook".[1][2]

The inglenook originated as a partially enclosed hearth area, appended to a larger room. The hearth was used for cooking, and its enclosing alcove became a natural place for people seeking warmth to gather. With changes in building design, kitchens became separate rooms, while inglenooks were retained in the living space as intimate warming places, subsidiary spaces within larger rooms.[3]

Look up inglenook in Wiktionary, the free dictionary.
Retrieved from "http://en.turkcewiki.org/w/index.php?title=Inglenook&oldid=1046087620"
This website is a mirror of Wikipedia, and is not affiliated with the Wikimedia Foundation.
Categories:
Hidden categories: