Jump to content
Distinguishable space within a building or other structure
For other uses, see Room (disambiguation). 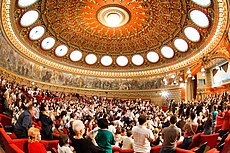 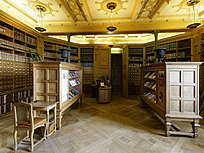 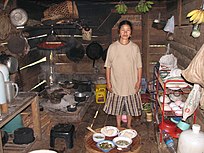 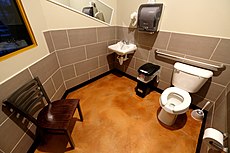 Various examples of rooms and interiors. Clockwise from top left: the Romanian Athenaeum concert hall in Bucharest; the catalog room of the Bibliothèque Mazarine in Paris; a restaurant bathroom in Oklahoma; a kitchen in Thailand

In a building or large vehicle, like a ship, a room is any enclosed space within a number of walls to which entry is possible only via a door or other dividing structure that connects it to either a passageway, another room, or the outdoors, that is large enough for several people to move about, and whose size, fixtures, furnishings, and sometimes placement within the building or ship support the activity to be conducted in it.

In early structures, the different room types could be identified to include bedrooms, kitchens, bathing rooms, closets, reception rooms, and other specialized uses. The aforementioned Akrotiri excavations reveal rooms sometimes built above other rooms connected by staircases, bathrooms with alabaster appliances such as washbasins, bathing tubs, and toilets, all connected to an elaborate twin plumbing systems of ceramic pipes for cold and hot water separately.[1] Ancient Rome manifested very complex building forms with a variety of room types, including some of the earliest examples of rooms for indoor bathing. The Anasazi civilization also had an early complex development of room structures, probably the oldest in North America, while the Maya of Central America had very advanced room configurations as early as several hundred AD. By at least the early Han Dynasty in China (e.g. approximately 200 BC)[disputed – discuss], comfort room complex multi-level building forms emerged, particularly for religious and public purposes; these designs featured many roomed structures and included vertical connections of rooms.

Other rooms are meant to promote comfort and cleanliness, such as the toilet and bathroom, which may be combined or which may be in separate rooms. The public equivalent is the restroom, which usually features a toilet and handwashing facilities, but not usually a shower or a bathtub. Showers are only available in athletic or aquatic facilities which feature a changing room.

A variety of room types have been distinguished over time, the main purpose of which was socializing with other people.

A sick room is a specialized room, sometimes just large enough to contain a bed, where a family member could be conveniently tended and kept separate from the rest of the household while recuperating from an illness.

An en-suite room is a type of room which includes a private room, private washroom and access to a communal kitchen.[5] The washroom generally includes an en-suite shower, a sink and a toilet. "En-suite" usually indicates a private space, especially if it is student accommodation. En-suite rooms for students are intended to provide study space and a peaceful environment.[6]

Retrieved from "http://en.turkcewiki.org/w/index.php?title=Room&oldid=1121168149"
This website is a mirror of Wikipedia, and is not affiliated with the Wikimedia Foundation.
Categories:
Hidden categories: