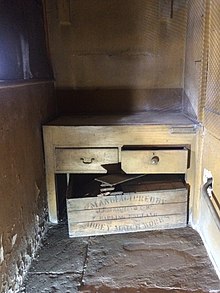 This is the pastry larder at The Regency Town House in Hove. The pastry larder had a marble-topped table and deep drawers which would have contained flour and sugar. Pastry could be made here away from the heat of the kitchen.[1]

A larder is a cool area for storing food prior to use. Originally, it was where raw meat was larded—covered in fat—to be preserved.[2] By the 18th century, the term had expanded. Now a dry larder was where bread, pastry, milk, butter, or cooked meats were stored.[2] Larders were commonplace in houses before the widespread use of the refrigerator.

Stone larders were designed to keep cold in the hottest weather. They had slate or marble shelves two or three inches thick. These shelves were wedged into thick stone walls. Fish or vegetables were laid directly onto the shelves and covered with muslin or handfuls of wet rushes were sprinkled under and around.[3]

In the northern hemisphere, most houses would be arranged to have their larders and kitchens on the north or west side of the house[2] where they received the least amount of sun. In Australia and New Zealand, larders were placed on the south or east sides of the house for the same reason. 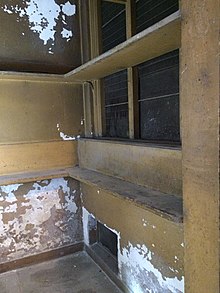 Inside the meat safe or wet larder at The Regency Town House in Hove, Britain. Meat larders have hooks for hanging joints of meat.[1]

Many larders have small, unglazed windows with window openings covered in fine mesh.[2][1] This allows free circulation of air without allowing flies to enter. Many larders also have tiled or painted walls to simplify cleaning. [1] Older larders, and especially those in larger houses, have hooks in the ceiling to hang joints of meat.[1]

A pantry may contain a thrawl, a term used in Derbyshire and Yorkshire to denote a stone slab or shelf used to keep food cool in the days before refrigeration was domestically available. In a late medieval hall, a thrawl would have been equivalent to a larder. In a large or moderately large 19th-century house, all these rooms would have been placed in the lowest, and/or as convenient, coolest possible location in the building to use the mass of the ground to retain a low summer temperature. For this reason, a buttery was usually called the cellar by this stage.

In medieval households, the word "larder" referred both to an office responsible for fish, jams, and meat, as well as to the room in which these commodities were kept. It was headed by a larderer.[5] The Scots term for larder was spence,[6] This referred specifically to a place from which stores or food were distributed.[2] And so in Scotland larderers (also pantlers and cellarers) were known as spencers.

The office generally was subordinated to the kitchen and existed as a separate office only in larger households. It was closely connected to other offices of the kitchen, such as the saucery and the scullery.[7]

Larders were used by the Indus Valley civilization to store bones of goats, oxen, and sheep. These larders were made of large clay pots.[8]

Places where animals store food for later consumption are sometimes referred to as 'larders', a well-known example being the hoards of seeds and nuts hidden by squirrels to provide a store of fresh food during the leaner months of the year.[9]

For alligators and crocodiles, larders are underwater storage places for their fresh kills until such time as they wish to consume the carcass when its flesh is rotten. These larders are usually dug into the side of a land bank, or wedged under a log or tree root.

Look up larder in Wiktionary, the free dictionary.

Retrieved from "http://en.turkcewiki.org/w/index.php?title=Larder&oldid=1126891508"
This website is a mirror of Wikipedia, and is not affiliated with the Wikimedia Foundation.
Categories:
Hidden categories: