Wentworth Woodhouse, Yorkshire, the largest private house in the United Kingdom.[1] Picture from A Complete History of the County of York by Thomas Allen (1828–1830) 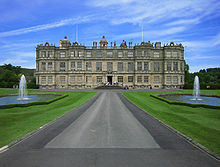 Longleat House, Wiltshire, seat of the Marquesses of Bath

A great house is a large house or mansion with luxurious appointments and great retinues of indoor and outdoor staff. The term is used mainly historically, especially of properties at the turn of the 20th century, i.e., the late Victorian or Edwardian era in the United Kingdom and the Gilded Age in the United States.

There is no precise definition of "great house", and the understanding of varies between countries. In England, while most villages would have a manor house since time immemorial, originally home of the lord of the manor and sometimes referred to as "the big house", not all would have anything as lavish as a traditional English country house, one of the traditional markers of an established "county" family that derived at least a part of its income from landed property. Stately homes, even rarer and more expensive, were associated with the peerage, not the gentry. Many mansions were demolished in the 20th century; families that had previously split their time between their country house and their town house found the maintenance of both too expensive. Many properties are now open to the public as historic house museums, either run by their ancestral owners on a commercial basis, or having been given to English Heritage or similar organisations. Others operate as hotels and wedding venues. Some still serve as the family seat.

In Ireland, the term big house is usual for the houses of the Anglo-Irish ascendancy.[2][3][4]

In the United States, great houses can be found on streets known informally as "millionaires' mile" (or "row") in certain cities.

In Jamaica, "great house" is the standard term for the house at the centre of plantation life,[5] what in the United States is called a plantation house.

One commonality between countries is that the family occupying the great house were outnumbered, often greatly so, by their staff. There was often an elaborate hierarchy among domestic workers, probably most familiar to people today through television dramas such as Downton Abbey.

As in the past, today's great houses are limited to heads of state, the very rich, or those who have inherited them; few in the developed world are staffed at the level of past centuries. Nowadays, the International Guild of Butlers estimates that the annual salaries of a 20–25 person household staff total in excess of US$1,000,000.

On large estates or in families with more than one residence, there may be a steward (or the modern equivalent, an estate manager) who oversees direction of the entire establishment. Today, it is not uncommon for a couple to split the duties of management between them.

The head of the household is not the butler, but the house manager. An estate manager manages more than one property, and usually has financial and managerial background.

Practices vary depending on the size of the household and the preference of the employers, but in general the staff is divided into departments run by the following staff:[3][4]

For the master of the house:

For the lady of the house:

For needs of the household:

An estate manager may have charge of the maintenance and care of the grounds, landscaping, and outbuildings (pool, cabana, stables, greenhouse etc.) which is divided into departments run by the:

The complex hierarchy of a staff in a great house has been portrayed in several notable productions for film and television. Among these are:

Retrieved from "http://en.turkcewiki.org/w/index.php?title=Great_house&oldid=1078594465"
This website is a mirror of Wikipedia, and is not affiliated with the Wikimedia Foundation.
Categories:
Hidden categories: