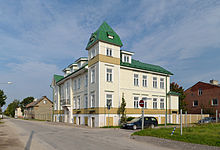 A wooden house in Tartu, Estonia
For broader coverage of this topic, see List of building types.
Further information: House
This article is about house types by form or structure. For house types by decoration or appearance, see List of house styles.

This is a list of house types. Houses can be built in a large variety of configurations. A basic division is between free-standing or single-family detached homes and various types of attached or multi-family residential dwellings. Both may vary greatly in scale and the amount of accommodation provided.

A Hut is a primitive dwelling, usually one room and one story in height. The design and materials of huts vary widely around the world.

Bungalow is a common term applied to a low one-story house with a shallow-pitched roof (in some locations, dormered varieties are referred to as 1.5-story, such as the chalet bungalow in the United Kingdom).[11]

A Cottage is a small house, usually one story in height, although the term is sometimes applied to larger structures.

A Ranch-style house or Rambler is one-story, low to the ground, with a low-pitched roof, usually rectangular, L- or U-shaped with deep overhanging eaves[12] Ranch styles include: 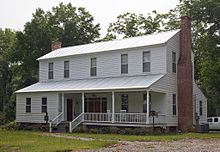 An I-house is a two-story house that is one room deep with a double-pen, hall-parlor, central-hall or saddlebag layout.[14]

A Gablefront house or Gablefront cottage has a gable roof that faces its street or avenue, as in the novel The House of Seven Gables. 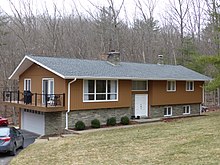 Split-level house is a design of house that was commonly built during the 1950s and 1960s. It has two nearly equal sections that are located on two different levels, with a short stairway in the corridor connecting them.

A Tower house is a compact two or more story house, often fortified. 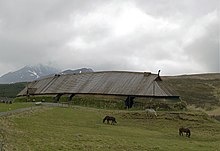 A Longhouse is historical house type typically for family groups.

A Housebarn is a combined house and barn.

By construction method or materials[edit] 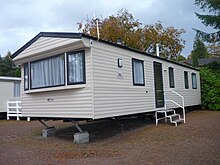 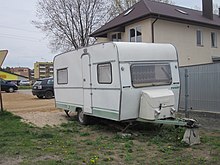 Retrieved from "http://en.turkcewiki.org/w/index.php?title=List_of_house_types&oldid=988827609"
This website is a mirror of Wikipedia, and is not affiliated with the Wikimedia Foundation.
Categories:
Hidden categories: