Jump to navigation Jump to search
For other uses, see Pergola (disambiguation). 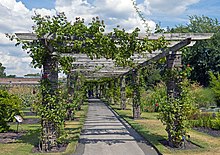 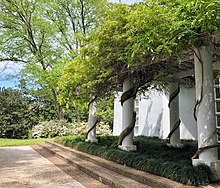 This is a pergola covered by wisteria at a private home in Alabama. 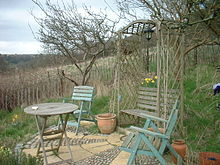 A pergola is an outdoor garden feature forming a shaded walkway, passageway, or sitting area of vertical posts or pillars that usually support cross-beams and a sturdy open lattice, often upon which woody vines are trained.[1] The origin of the word is the Late Latin pergula, referring to a projecting eave. As a type of gazebo, it may also be an extension of a building or serve as protection for an open terrace or a link between pavilions. They are different from green tunnels, with a green tunnel being a type of road under a canopy of trees.

Pergolas are sometimes confused with arbours ("arbors" in American English), and the terms are often used interchangeably. An arbour is generally regarded as a wooden bench seat with a roof, usually enclosed by lattice panels forming a framework for climbing plants. A pergola, on the other hand, is a much larger and more open structure and does not normally include integral seating. 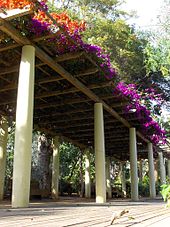 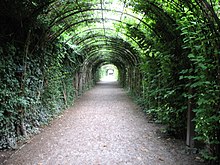 A pergola is a garden feature forming a shaded walkway, passageway, or sitting area of vertical posts or pillars that usually support cross-beams and a sturdy open lattice, often upon which woody vines are trained. As a type of gazebo, it may also be an extension of a building or serve as protection for an open terrace or a link between pavilions.

Pergolas may link pavilions or extend from a building's door to an open garden feature such as an isolated terrace or pool. Freestanding pergolas, those not attached to a home or other structure, provide a sitting area that allows for breeze and light sun, but offer protection from the harsh glare of direct sunlight. Pergolas also give climbing plants a structure on which to grow.[2]

Pergolas are more permanent architectural features than the green tunnels of late medieval and early Renaissance gardens, which were often formed of springy withies—easily replaced shoots of willow or hazel—bound together at the heads to form a series of arches, then loosely woven with long slats on which climbers were grown, to make a passage that was both cool and shaded and moderately dry in a shower. At the Medici villa, La Petraia, inner and outer curving segments of such green walks, the forerunners of pergolas, give structure to the pattern, which can be viewed from the long terrace above it. 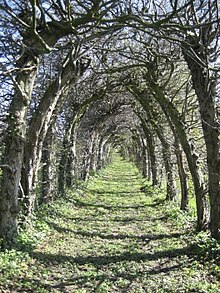 The hornbeams of the 180-meter-long Pitet's bower are from the 19th century and are included in Braives' classified property list, province of Liège, Belgium (1942) 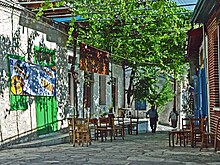 Alley with grapevine-covered pergola in the centre of Koilani village, Cyprus

Contemporary pergola in a square in Benicassim, Spain

The origin of the word is the Late Latin pergula, referring to a projecting eave.[3] The English term was borrowed from Italian. It was mentioned in an Italian context in 1645 by John Evelyn at the cloister of Trinità dei Monti in Rome[4] He used the term in an English context in 1654 when, in the company of the fifth Earl of Pembroke, Evelyn watched the coursing of hares from a "pergola" built on the downs near Salisbury for that purpose.[5]

The clearly artificial nature of the pergola made it fall from favor in the naturalistic gardening styles of the 18th and 19th centuries. Yet handsome pergolas on brick and stone pillars with powerful cross-beams were a feature of the gardens designed in the late 19th and early 20th centuries by Sir Edwin Lutyens and Gertrude Jekyll and epitomize their trademark of firm structure luxuriantly planted. A particularly extensive pergola features at the gardens of The Hill, Hampstead (London), designed by Thomas Mawson for his client W. H. Lever.

Modern pergola design material including wood, vinyl, fiberglass, aluminum and chlorinated polyvinyl chloride (CPVC) rather than brick or stone pillars, are more affordable and are increasing in popularity. Wooden pergolas are either made from a weather-resistant wood, such as western redcedar (Thuja plicata) or, formerly, of coast redwood (Sequoia sempervirens), are painted or stained, or use wood treated with preservatives for outdoor use. For a low maintenance alternative to wood, vinyl, fiberglass, aluminum and CPVC can be used. These materials do not require yearly paint or stain like a wooden pergola and their manufacture can make them even stronger and longer-lasting than a wooden pergola.

Retrieved from "http://en.turkcewiki.org/w/index.php?title=Pergola&oldid=947284798"
This website is a mirror of Wikipedia, and is not affiliated with the Wikimedia Foundation.
Categories:
Hidden categories: