Jump to navigation Jump to search
For other uses, see Patio (disambiguation). 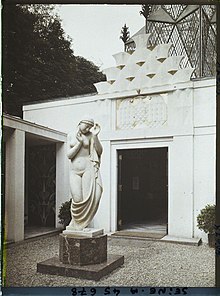 Patio in the Polish pavilion at the World Expo in Paris (1925). 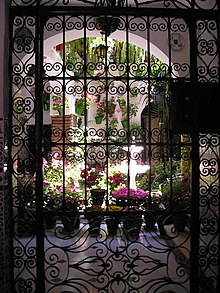 The Andalusian Patio in Córdoba, Spain, seen through a forged-iron gate.

A patio (/ˈpætioʊ/,[1] from Spanish: patio [ˈpatjo]; "courtyard", "forecourt", "yard") is an outdoor space generally used for dining or recreation that adjoins a residence and is typically paved. In Australia the term is expanded to include roofed structures such as a veranda, which provides protection from sun and rain.[2]

Patios are most commonly paved with concrete or stone slabs (also known as paving flags). They can also be created using bricks, block paving, tiles, cobbles,[3] or gravel. Other kinds of patio materials these days include alumawood, aluminum, acrylic, and glass.

Other common patio features include additional of reinforcement for hot tubs and additional steps from the home.

Patio is also a general term used for outdoor seating at restaurants, especially in Canadian English. While common in Europe even before 1900, eating outdoors at restaurants in North America was exotic until the 1940s. The Hotel St. Moritz in New York in the 1950s advertised itself as having the first true continental cafe with outdoor seating. The Toronto Star welcomed that city's first patio in the 1960s. In the United States, blessed with a warmer and sunnier climate than Northern Europe, outdoor dining grew rapidly in the 1960s and today is a popular dining experience in the warmer parts of the mainland. [4]

Retrieved from "http://en.turkcewiki.org/w/index.php?title=Patio&oldid=999645204"
This website is a mirror of Wikipedia, and is not affiliated with the Wikimedia Foundation.
Categories:
Hidden categories: