(Redirected from Janitorial closet)
Jump to navigation Jump to search
This article is about the occupation. For the Scrubs character, see Janitor (Scrubs).
Street sweeper, janitor, professional who takes care of buildings such as hospitals and schools 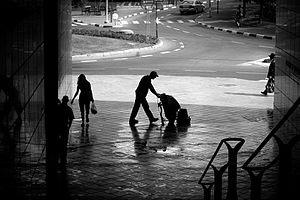 A janitor cleaning up the sidewalk

A janitor (American English, Scottish English), custodian, porter, cleaner or caretaker is a person who cleans and maintains buildings such as hospitals, schools, and residential accommodation. Janitors' primary responsibility is as a cleaner. Janitors typically earn an average wage of $15 per hour in the United States[1]. That translates to an annual salary of around $35,000 for states that pay Janitors the most amount, such as New York, Massachusetts, and Connecticut. In some cases, they will also carry out maintenance and security duties. A similar position, but usually with more managerial duties and not including cleaning, is occupied by building superintendents in the United States (and occasionally in Canada) and School Site Managers in schools in the United Kingdom. Cleaning is one of the most commonly outsourced services.

Although most of the work performed by janitors and building cleaners is indoors, sometimes it can be outdoors. Outdoors work mainly include sweeping walkways, mowing lawns, or shoveling snow. In some facilities or buildings, a separate company may be hired to do outdoor work. Office buildings are usually cleaned when they are vacant, so most of the office janitorial staff work during the evening. The work can be physically demanding and sometimes dirty and unpleasant.[2] General janitor duties often include the following tasks:

Office cleaning staff perform many of the same duties as janitors. However the tasks are divided among different members. Additional tasks include:

Cleaning is one of the most commonly outsourced services.[5] Some of the reasons for this include:

Between 17% to 23% of the total undocumented immigrant population living in the United States work in the cleaning industry[6] (and growing at a rate of 1/2% to 1/3% percent per year). In addition to this population offering an abundant source of inexpensive labor,[7] janitorial work is mostly undertaken at night, making it an appealing option for janitorial companies to employ undocumented workers[8][9] seeking clandestine employment.

Retrieved from "http://en.turkcewiki.org/w/index.php?title=Janitor&oldid=965141574"
This website is a mirror of Wikipedia, and is not affiliated with the Wikimedia Foundation.
Categories:
Hidden categories: