Jump to navigation Jump to search
Covered exterior gallery
For the surname, see Loggia (surname). For the collections of religious sayings, see Logia. 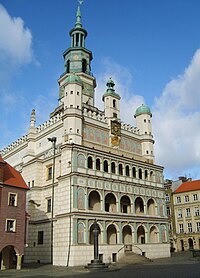 The Renaissance three-storey arcade loggia of the City Hall in Poznań served representative and communication purposes.

Villa Godi by Palladio. The portico is the focal point in the center with loggias used at each side of the structure as a corridor.

A loggia (/ˈloʊdʒ(i)ə/ LOH-j(ee-)ə, usually UK: /ˈlɒdʒ(i)ə/ LOJ-(ee-)ə, Italian: [ˈlɔddʒa]) is an architectural feature which is a covered exterior gallery or corridor usually on an upper level, or sometimes ground level. The outer wall is open to the elements, usually supported by a series of columns or arches. Loggias can be located either on the front or side of a building and are not meant for entrance but as an out-of-door sitting room.[1][2][3]

From the early Middle Ages, nearly every Italian comune had an open arched loggia in its main square, which served as a "symbol of communal justice and government and as a stage for civic ceremony".[4]

Definition of the Roman loggia[edit]

The main difference between a loggia and a portico is the role within the functional layout of the building. The portico allows entrance to the inside from the exterior and can be found on vernacular and small scale buildings. The loggia is accessed only from inside and intended as a place for leisure. Thus, it is found mainly on noble residences and public buildings. A classic use of both is that represented in the mosaics of Basilica of Sant' Apollinare Nuovo of the Royal Palace.

Loggias differ from verandas in that they are more architectural and, in form, are part of the main edifice in which they are located, while verandas are roofed structures attached on the outside of the main building.[1][5] A "double loggia" occurs when a loggia is located on an upper floor level above a loggia on the floor beneath.

Retrieved from "http://en.turkcewiki.org/w/index.php?title=Loggia&oldid=952688703"
This website is a mirror of Wikipedia, and is not affiliated with the Wikimedia Foundation.
Categories:
Hidden categories: