A hotel bedroom in South Africa

A bedroom is a room of a house, mansion, castle, palace, hotel, dormitory, apartment, condominium, duplex or townhouse where people sleep. A typical western bedroom contains as bedroom furniture one or two beds (ranging from a crib for an infant, a single or twin bed for a toddler, child, teenager, or single adult to bigger sizes like a full, double, queen, king or California king [eastern or waterbed size for a couple]), a clothes closet, and bedside table and dressing table, both of which usually contain drawers. Except in bungalows, ranch style homes, or one-storey motels, bedrooms are usually on one of the floors of a dwelling that is above ground level. 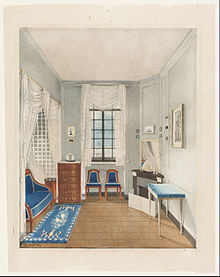 Illustration of a bedroom from France 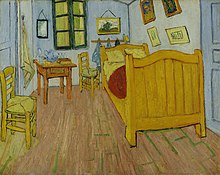 Bedroom in Arles, by Vincent van Gogh in October 1888, at the Van Gogh Museum of Amsterdam

In larger Victorian houses it was common to have accessible from the bedroom a boudoir for the lady of the house and a dressing room for the gentleman.[1] Attic bedrooms exist in some houses; since they are only separated from the outside air by the roof they are typically cold in winter and may be too hot in summer. The slope of the rafters supporting a pitched roof also makes them inconvenient. In houses where servants were living in they often used attic bedrooms.

In the 14th century the lower class slept on mattresses that were stuffed with hay and broom straws. During the 16th century mattresses stuffed with feathers started to gain popularity, with those who could afford them. The common person was doing well if he could buy a mattress after seven years of marriage.[2] In the 18th century cotton and wool started to become more common. The first coil spring mattress was not invented until 1871.[2] The most common and most purchased mattress is the innerspring mattress, though a wide variety of alternative materials are available including foam, latex, wool, and even silk. The variety of firmness choices range from relatively soft to a rather firm mattress. A bedroom may have bunk beds if two or more people share a room. A chamber pot kept under the bed or in a nightstand was usual in the period before modern domestic plumbing and bathrooms in dwellings. 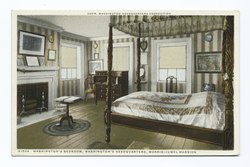 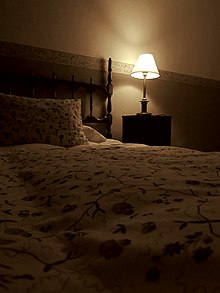 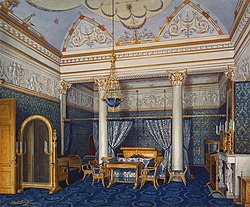 Furniture and other items in bedrooms vary greatly, depending on taste, local traditions and the socioeconomic status of an individual. For instance, a master bedroom may include a bed of a specific size (double, king or queen-sized); one or more dressers (or perhaps, a wardrobe armoire); a nightstand; one or more closets; and carpeting. Built-in closets are less common in Europe than in North America; thus there is greater use of freestanding wardrobes or armoires in Europe.

An individual's bedroom is a reflection of their personality, as well as social class and socioeconomic status, and is unique to each person. However, there are certain items that are common in most bedrooms. Mattresses usually have a bed set to raise the mattress off the floor and the bed often provides some decoration. There are many different types of mattresses.

Night stands are also popular. They are used to put various items on, such as an alarm clock or a small lamp. In the times before bathrooms existed in dwellings bedrooms often contained a washstand for tasks of personal hygiene. In the 2010s, having a television set in a bedroom is fairly common as well. 43% of American children from ages 3 to 4 have a television in their bedrooms.[3] Along with television sets many bedrooms also have computers, video game consoles, and a desk to do work. In the late 20th century and early 21st century the bedroom became a more social environment and people[who?] started to spend a lot more time in their bedrooms than in the past.

Bedding used in northern Europe (especially in Scandinavia) is significantly different from that used in North America and other parts of Europe.[citation needed] In Japan futons are common.[citation needed]

In addition to a bed (or, if shared by two or more children, a bunk bed), a child's bedroom may include a small closet or dressers, a toy box or computer game console, bookcase or other items.

A modern Western bedroom in Australia 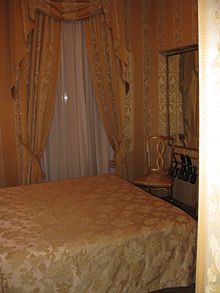 A hotel bedroom in Venice

Many houses in North America have at least two bedrooms—usually a primary bedroom and one or more bedrooms for either the children or guests.

In some jurisdictions there are basic features (such as a closet and a "means of egress") that a room must have in order to legally qualify as a bedroom. In many states, such as Alaska, bedrooms are not required to have closets and must instead meet minimum size requirements.

A closet by definition is a small space used to store things. In a bedroom, a closet is most commonly used for clothes and other small personal items that one may have. Walk in closets are more popular today and vary in size. However, in the past wardrobes have been the most prominent. A wardrobe is a tall rectangular shaped cabinet that clothes can be stored or hung in. Clothes are also kept in a dresser. Typically nicer clothes are kept in the closet because they can be hung up while leisure clothing and undergarments are stored in the dresser.

Sometimes, a primary bedroom is connected to a dedicated bathroom, often called an ensuite.

Bedrooms typically have a door for privacy (in some cases lockable from inside) and a window for ventilation. In larger bedrooms, a small desk and chair or an upholstered chair and a chest of drawers may also be used. In Western countries, some large bedrooms, called master bedrooms, may also contain a bathroom. Where space allows bedrooms may also have televisions and / or video players, and in some cases a personal computer.

In Japan, the notion of having a bedroom is much less important than it is in the west, especially as it pertains to having a private space for personal use. Indeed, having a unified house corresponds to having a unified family, a concept so important that areas are seldom personalized, even those pertaining to relationships. Everything is subject to the concept of primitive cohesion. This makes for flexibility in terms of the way various spaces are utilized: [4] Each evening, the Japanese unroll their futon directly on their tatami mats, typically close to one another. They then put them away come morning in the oshiire. The unity of the household is also reinforced by the use of sliding partitions (shoji) lined with rice paper and insulating in every way.

Materially, the Japanese tatami room, as opposed to its western counterpart (deemed The Western Room), has no door, bed, or even wall, making it barely detectable in space.

This room is typically situated towards the back of the home, close to the place dedicated to the family ancestors and opposite of the southern facade, the gardens, and the general exterior.

The second half of the twentieth century saw a considerable change in the bedroom style. Almost non-existent before World War Two, The Western Room continued to gain traction in new constructions to the point where there is a clear relationship between age of a building and presence of western-style bedrooms. Cultural habits, however, have not shifted as rapidly.

In the most densely-populated cities, there exists a type of hotel essentially consisting of stacks of individual "rooms" so cramped they hardly allow one to do more than lie down and sleep.

Retrieved from "http://en.turkcewiki.org/w/index.php?title=Bedroom&oldid=978903948"
This website is a mirror of Wikipedia, and is not affiliated with the Wikimedia Foundation.
Categories:
Hidden categories: