Jump to navigation Jump to search
Temporary hut during the Jewish festival of Sukkot
For the tractate of the Talmud, see Sukkah (Talmud).
Main article: Sukkot 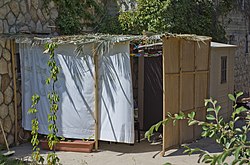 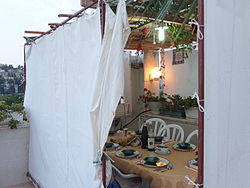 Canvas-sided sukkah on a roof, topped with palm branches and bamboo s'chach

A sukkah or succah (/ˈsʊkə/; Hebrew: סוכה‎ Hebrew pronunciation: [suˈka]; plural, סוכות Hebrew pronunciation: [suˈkot] sukkot  or sukkos or sukkoth, often translated as "booth") is a temporary hut constructed for use during the week-long Jewish festival of Sukkot. It is topped with branches and often well decorated with autumnal, harvest or Judaic themes. The Book of Vayikra (Leviticus) describes it as a symbolic wilderness shelter, commemorating the time God provided for the Israelites in the wilderness they inhabited after they were freed from slavery in Egypt.[1] It is common for Jews to eat, sleep and otherwise spend time in the sukkah. In Judaism, Sukkot is considered a joyous occasion and is referred to in Hebrew as Yom Simchateinu (the day of our rejoicing) or Z'man Simchateinu (the time of our rejoicing), and the sukkah itself symbolizes the frailty and transience of life and its dependence on God.[2] 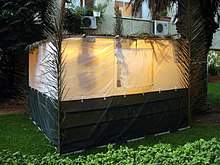 A sukkah in Herzliya

The halakha requires eating and traditionally sleeping in the sukkah. However, Jews are not expected to remain in the sukkah if they would be very uncomfortable there.[3] For this reason, Jews living at northern latitudes will generally not sleep in the sukkah due to the low temperatures of autumn nights. Some Jews in these locales will spend some time in the sukkah eating and relaxing but go indoors to sleep.

When rain falls on the sukkah, one is not required to stay inside. The Mishna in Sukkah 28b compares rain falling on a sukkah to a master who receives a drink from his servant and then throws it back in the servant's face. The analogy is that through the rainfall, God is showing displeasure with the performance of the mitzvah by not allowing the Jews to fulfill their obligation of sitting in the sukkah.[4]

In Israel, it is common practice for hotels, restaurants, snack shops, and outdoor tourist attractions (such as zoos) to provide a Kosher sukkah for customers to dine in.

A popular social activity which involves people visiting each other's Sukkot has become known as "Sukkah hopping". Food is laid out so that participants will be able to recite the various required blessings.[7] 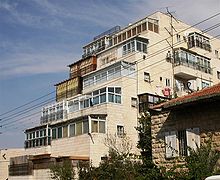 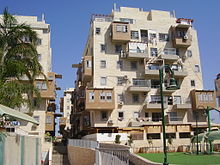 According to halakha, a sukkah is a structure consisting of a roof made of organic material which has been disconnected from the ground for the purpose of the commandment (the s'chach). A sukkah must have three walls. It should be at least three feet tall, and be positioned so that all or part of its roof is open to the sky. (Only the part which is under the sky is kosher.) Most authorities require its floor area to be at least 16 square cubits.

In practice, the walls of a sukkah can be constructed from any material that will withstand a normally anticipated terrestrial wind. If the material is not rigid and therefore will sway in the wind, the sukkah is not kosher (Talmud, Sukkah 24b). Accordingly, there is a discussion among contemporary halakhic authorities whether canvas may be used for walls: Some, such as R. Ovadiah Yosef (Shu"t Yechaveh Da'at 3:46) hold that even the slightest degree of swaying in the wind will disqualify the sukkah walls, and thus canvas cannot realistically be employed. Others, such as the Chazon Ish, permit motion to and fro of less than three handbreadths, thereby facilitating the usage of canvas walls which are anchored at all sides. The specific details of what constitutes a wall, the minimum and maximum wall heights, whether there can be spaces between the walls and the roof, and the exact material required for the s'chach (roofing) can be found in various exegetical texts.

A sukkah can be built on the ground or on an open porch or balcony. Indeed, many observant Jews who design their home's porch or deck will do so in a fashion that aligns with their sukkah-building needs. Portable sukkot made of a collapsible metal frame and cloth walls have recently become available for those who have little space, or for those who are traveling (in order to have a place to eat one's meals).

The roof covering, known as s'chach in Hebrew, must consist of something that grew from the earth but is currently disconnected from it. Palm leaves, bamboo sticks, pine branches, wood and the like can all be used for s'chach, unless they were processed previously for a different use.[8]

There must be enough s'chach that inside the sukkah there should be more shade than sun. However, there must be sufficient gaps between the pieces of s'chach so that one can see the sun or stars.

Many people hang decorations such as streamers, shiny ornaments, and pictures from the interior walls and ceiling beams of a sukkah. Fresh, dried or plastic fruit—including etrogs and the seven species for which Israel is praised (wheat, barley, grapes, figs, pomegranates, olives and dates; see Deuteronomy 8:8)—are popular decorations.

Some families also line the interior walls with white sheeting, in order to recall the "Clouds of Glory" that surrounded the Jewish nation during their wanderings in the desert. The Chabad custom is not to decorate the sukkah, as the sukkah itself is considered to be an object of beauty.[9]

According to Jewish law, one must recite the following blessing when using the sukkah. The blessing is normally recited after the blessing made on food, such as on bread or cake:

During the holiday, some Jews recite the ushpizin prayer which symbolizes the welcoming of seven "exalted guests" into the sukkah. These ushpizin, or guests, represent the seven shepherds of Israel: Abraham, Isaac, Jacob, Moses, Aaron, Joseph and David. According to tradition, each night a different guest enters the sukkah followed by the other six. Each of the ushpizin parallels the spiritual focus of the day on which they visit.

In Chabad tradition, an additional set of corresponding "chasidic" ushpizin enter the sukkah, beginning with the Baal Shem Tov and the Maggid of Mezeritch and continuing with the consecutive rebbes of the Chabad Hasidic dynasty.[10]

In 2010, Bet Shira Congregation in Miami, Florida, erected a tent as a drive-through Sukkah, dubbed "McBet Shira Sukkah", in the parking lot of the synagogue.[11][12][13]

Sukkah City was a public art and architecture competition planned for New York City's Union Square Park. The winning design was chosen as the City Sukkah, to stand, starting on September 22, 2010, for the requisite seven days of the harvest holiday. A committee of art critics and celebrated architects selected the 12 finalists from a field of entries.[14]

Retrieved from "http://en.turkcewiki.org/w/index.php?title=Sukkah&oldid=977191915"
This website is a mirror of Wikipedia, and is not affiliated with the Wikimedia Foundation.
Categories:
Hidden categories: