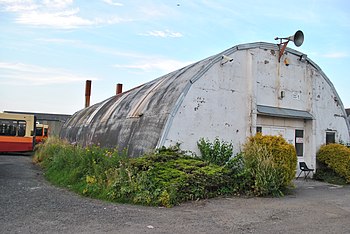 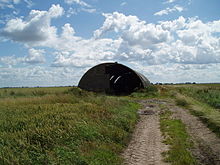 The Romney hut is a prefabricated steel structure used by the British military, developed during World War II to supersede the Iris hut.

At the outbreak of World War II, the British military developed a series of prefabricated huts to supplement the World-War-I-era Nissen hut. The Iris hut was one of these, a medium-scale hut of 35 feet (11 m) span and from 60 feet (18 m) to 96 feet (29 m) in length, with bays of 4 feet (1.2 m) sectional length able to be added as required. However, the Iris hut had a major design flaw: it was unable to resist the weight of snow lying on the roof and had a tendency to collapse after snowfalls. For this reason, it was superseded by the Romney hut by 1941.[1]

Both the Iris hut and the Romney hut were constructed of a clamped tubular steel frame with a central entrance.[2] The hut was used to accommodate facilities for which abnormal roof spans were required.[3] On some airfields, two or more Romney or Iris huts would be erected to accommodate large stores and workshops, or occasionally used as aircraft hangars.[4]

It was invented by Lt Col Edgar Frank Brawn of the Royal Engineers.[5]

Retrieved from "http://en.turkcewiki.org/w/index.php?title=Romney_hut&oldid=1099838048"
This website is a mirror of Wikipedia, and is not affiliated with the Wikimedia Foundation.
Categories:
Hidden categories: