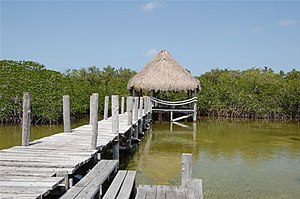 A palapa on the Huach River

A palapa (a Spanish word of Tagalog origin, originally meaning "petiole of the palm leaf") is an open-sided dwelling with a thatched roof made of dried palm leaves.[1] It is very useful in hot weather and, therefore, very common on Mexican beaches and deserts.

Palapa is derived from the traditional construction methods of the bahay kubo ("nipa hut") architectural style of the Philippines, carried to Nueva España (along with coconuts, which are not native to the Americas) via the Manila galleons during the Spanish colonial period.[2]

Palapas are also common in Honduras and other Central American countries.

Retrieved from "http://en.turkcewiki.org/w/index.php?title=Palapa_(structure)&oldid=1127183453"
This website is a mirror of Wikipedia, and is not affiliated with the Wikimedia Foundation.
Categories:
Hidden categories: