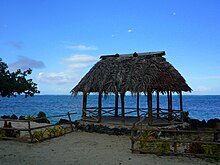 A beach fale is a simple thatched hut in the architecture of Samoa. Beach fales are also common in other parts of Polynesia. They have become popular in tourism as a low budget accommodation situated by the coast, built with a few posts, no walls and a thatched roof with a round or oval shape.

The word fale (pronounced fah-leh) is the Samoan word for any type of building. A similar word is used in other Polynesian languages, for example whare in the Māori language.

In the Samoan language, these simple huts are called faleo‘o. They are common in villages where they provide extra storage or space for dragon boats.

Beach fale are usually located around the coast in villages. In Samoa, renting out a beach fale to visitors is a common means for providing extra income for families.[1]

In comparison to beach fale, this is a large traditional Samoan house, fale tele which serves as a meeting house or guest house.

Retrieved from "http://en.turkcewiki.org/w/index.php?title=Beach_fale&oldid=1106324812"
This website is a mirror of Wikipedia, and is not affiliated with the Wikimedia Foundation.
Categories:
Hidden categories: