(Redirected from Ruka (Mapuche))
Jump to navigation Jump to search
Traditional Mapuche house type
This article is about a house type. For a ski resort in Finland, see Ruka (Finland). For other use, see Ruka (disambiguation). 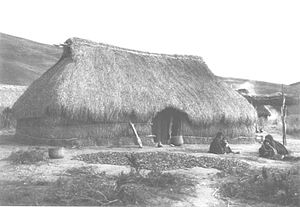 A ruka or ruca is a traditional Mapuche house type. Rukas were originally round with a conical roof. Rucas are typically built communally. Rukas traditionally lack windows and are made up a single open space in the interior.[1] The interior of the rukas are organized around a central fireplace.[1]

Travellers in the first half of the 20th century compared the housing conditions of rukas favourably to the tenements of Santiago and the countryside cottages of non-Mapuche Chilean farmers.[1]

Retrieved from "http://en.turkcewiki.org/w/index.php?title=Ruka_(house_type)&oldid=1090586725"
This website is a mirror of Wikipedia, and is not affiliated with the Wikimedia Foundation.
Categories:
Hidden categories: