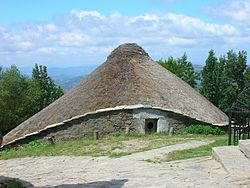 Palloza in O Cebreiro, in the municipality of Pedrafita do Cebreiro. The ethnographic park of this town, the first step in Galician land of the French Way, has several restored examples of traditional palloza, buildings characteristic of the pre-Roman culture which still exists in many other parts of the natural region of Os Ancares[1]

A palloza (also known as pallouza or pallaza) is a traditional dwelling of the Serra dos Ancares of northwest Spain.

The palloza is pre-Roman. Pallozas have similarities with the round houses of the Iron Age in Great Britain such as Chysauster in Cornwall and the buildings of the Castro culture. The fictive village of Asterix is composed in part by pallozas. 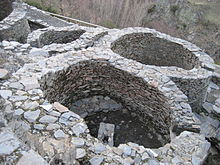 Castro of Chano (municipality of Peranzanes (Province of León). Detail of one of the buildings. Inside can see the home.

Its name is actually a corruption of the Galician word "pallaza", first used in the late 19th century by ethnographers such as German Fritz Krüger, who was referring to the material used to make the roof. The traditional name of these buildings is in fact casa de teito or casa de teitu.

The term palloza (spelled palhoça) is also used in the Portuguese language, where it describes a type of small cabin built with wood and thatched roof. 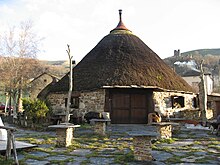 Municipal palloza in Balboa (León). It is used as bar and restaurant.

Pallozas were used until the second half of the 20th century, when improved communications brought modern building concepts to the area. Pallozas survive in Galicia, comarca of Os Ancares, and in several areas of Candín and western Asturias. The remarkable pallozas in the Bierzan town of Campo del Agua was largely destroyed by a fire in the mid 1980s. The most famous may be that of Piornedo, which since the 1970s has been an ethnographic museum. New pallozas are used mainly as holiday homes, even in remote areas, where they were not traditionally used.

Retrieved from "http://en.turkcewiki.org/w/index.php?title=Palloza&oldid=1087783714"
This website is a mirror of Wikipedia, and is not affiliated with the Wikimedia Foundation.
Categories:
Hidden categories: