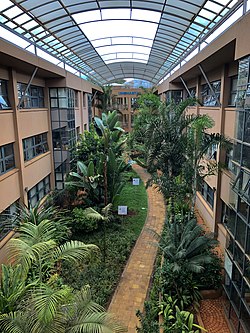 UN-Habitat headquarters at the United Nations Office at Nairobi 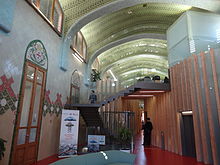 UN-Habitat works in more than 70 countries in five continents focusing on seven areas:

The governance structure of the programme is made up of three decision-making bodies: the UN-Habitat Assembly, an executive board and a Committee of Permanent Representatives.[3] Previously, The Governing Council was the decision-making body for the Programme, but it was dissolved following a resolution passed by the UN General Assembly.[4]

The assembly is a universal body composed of the 193 member states of the United Nations and convenes every four years at the Headquarters of UN-Habitat in Nairobi. The first assembly was held in May 2019.[5] The presidency of the first assembly was held by Mexico. Mexico's presidency was represented by Martha Delgado Peralta the Mexican Undersecretary of Multilateral Affairs and Human Rights.[6]

Before 2002, the title of the head of the programme was director of the United Nations Centre for Human Settlements.[10]

The World Urban Forum is an international conference dedicated to urban issues, organized by UN-Habitat. It was established by the United Nations to examine one of the most pressing issues facing the world today: rapid urbanization and how to ensure a sustainable urban development. It is organized biennially in the years between the UN-Habitat governing councils.

The World Urban Campaign is the world living platform on cities for sharing and learning on initiatives, actions and policies driving positive change towards sustainable urbanization. Coordinated by UN-Habitat, it is a global coalition of public, private and civil society partners seeking to raise the urban agenda. The campaign is UN-Habitat's partners' platform for the preparation of the Third United Nations Conference on Housing and Sustainable Urban Development (Habitat III) held in 2016.

The United Nations has designated the first Monday of October every year as World Habitat Day. This is an occasion to reflect on the state of our towns and cities and the basic right of all to adequate shelter. It is also intended to remind the world of its collective responsibility for the future of human habitat.

The UN-Habitat Scroll of Honour Award is an award given by the United Nations Human Settlements Programme in recognition of work carried out in the field of human settlements development. The aim of the award is to honour individuals and institutions instrumental in improving the living conditions in urban centres around the world.

The UN-Habitat World Habitat Award is presented in recognition of "projects that provide practical, innovative, solutions to current housing needs, with a particular focus on decent, affordable, adequate and sustainable housing". Established in 1985 by UN-Habitat in partnership with the Building and Social Housing Foundation, each year two awards are presented to recipients at the annual session of the Governing Council of UN-Habitat at the United Nations office in Nairobi. The goal of the award is to identify, celebrate and promote "good practice in housing projects that seek to further affordability and sustainability in housing globally".[11]

The United Nations Advisory Committee of Local Authorities (UNACLA) was established in 2000[12] in line with the UN Habitat Governing Council Resolution 17/18 of 1999[13] as an advisory body to strengthen the dialogue of the UN System with local authorities in relation to the implementation of the Habitat Agenda. In September 2004, UN-HABITAT established a formal relationship with United Cities and Local Governments,[14] which now chairs UNACLA and holds 10 of its 20 seats. UCLG co-hosts the UNACLA secretariat with UN-Habitat.[15][16]

Retrieved from "http://en.turkcewiki.org/w/index.php?title=United_Nations_Human_Settlements_Programme&oldid=1083594571"
This website is a mirror of Wikipedia, and is not affiliated with the Wikimedia Foundation.
Categories:
Hidden categories: