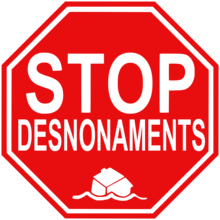 The right to housing is the economic, social and cultural right to adequate housing and shelter. It is recognized in some national constitutions and in the Universal Declaration of Human Rights and International Covenant on Economic, Social and Cultural Rights. 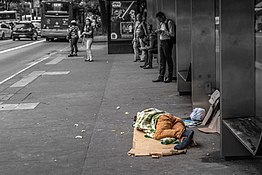 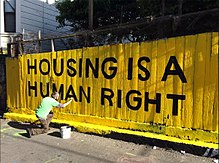 Housing Is A Human Right

Everyone has the right to a standard of living adequate for the health and well-being of himself and of his family, including food, clothing, housing and medical care and necessary social services, and the right to security in the event of unemployment, sickness, disability, widowhood, old age or other lack of livelihood in circumstances beyond his control. 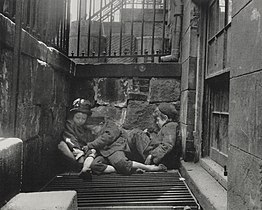 Article 11(1) of the International Covenant on Economic, Social and Cultural Rights (ICESCR) also guarantees the right to housing as part of the right to an adequate standard of living.[1]

The Yogyakarta Principles on the application of international human rights law in relation to sexual orientation and gender identity affirm that:[3]

everyone has the right to adequate housing, including protection from eviction, without discrimination and that States shall a) take all necessary legislative, administrative and other measures to ensure security of tenure and access to affordable, habitable, accessible, culturally appropriate and safe housing, not including shelters and other emergency accommodation, without discrimination on the basis of sexual orientation, gender identity or material or family status; b) take all necessary legislative, administrative and other measures to prohibit the execution of evictions that are not in conformity with their international human rights obligations, and ensure that adequate and effective legal or other appropriate remedies are available to any person claiming that a right to protection against forced evictions has been violated or is under threat of violation, including the right to resettlement, which includes the right to alternative land of better or equal quality and to adequate housing, without discrimination.

The right to housing is also enshrined in Article 28 of the Convention on the Rights of Persons with Disabilities, Article 16 of the European Social Charter (Article 31 of the Revised European Social charter) and in the African Charter on Human and Peoples' Rights.[4] According to UN Committee on Economic, Social and Cultural Rights, aspects of right to housing under ICESCR include: legal security of tenure; availability of services, materials, facilities and infrastructure; affordability; habitability; accessibility; location and cultural adequacy.[5] As a political goal, right to housing was declared in F. D. Roosevelt's 1944 speech on the Second Bill of Rights.

The TENLAW project provided a more efficient opportunity to international and interdisciplinary research in the housing and property field. It created the first housing chair at the University Rovira i Virgili (Spain) on July 11, 2013, which opened up possibilities for research and dissemination in this area.[6]

The simplified logo of UN Habitat

The right to adequate housing was a key issue at the 1996 Habitat meeting in Istanbul and a main theme in the Istanbul Agreement and Habitat Agenda. Paragraph 61 of the agenda identifies the steps required by governments to "promote, protect and ensure the full and progressive realisation of the right to adequate housing". The 2001 Habitat meeting, known as Istanbul +5, reaffirmed the 1996 Istanbul Agreement and Habitat Agenda and established the UN Human Settlement Programme to promote the right to housing in cooperation with the Office of the High Commissioner for Human Rights. Known as UN–HABITAT, the programme is the most important international forum for the right to housing. It is tasked with promoting housing rights through awareness campaigns, and to develop benchmarks and monitoring systems.[1]

In South Africa, section 26 of Chapter Two of the Constitution establishes that "everyone has the right to have access to adequate housing". The Department of Human Settlements is tasked with implementing this mandate. Based on recent data, around 3.6 million South Africans still live in shacks or informal settlements (2013 data),[9] while it is estimated that around 200,000 are homeless or living on the streets (2015 data).[10]

Retrieved from "http://en.turkcewiki.org/w/index.php?title=Right_to_housing&oldid=1054460780"
This website is a mirror of Wikipedia, and is not affiliated with the Wikimedia Foundation.
Categories:
Hidden categories: