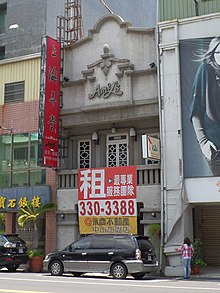 Notice of renting availability of a building in Kaohsiung, Taiwan 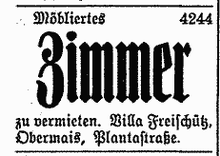 Renting, also known as hiring or letting, is an agreement where a payment is made for the temporary use of a good, service or property owned by another. A gross lease is when the tenant pays a flat rental amount and the landlord pays for all property charges regularly incurred by the ownership. An example of renting is equipment rental. Renting can be an example of the sharing economy.

Various types of rent are referenced in Roman law: rent (canon) under the long leasehold tenure of Emphyteusis; rent (reditus) of a farm; ground-rent (solarium); rent of state lands (vectigal); and the annual rent (prensio) payable for the jus superficiarum or right to the perpetual enjoyment of anything built on the surface of land.[1]

There are many possible reasons for renting instead of buying, for example:

Short-term rental of all sorts of products (excluding real estate and holiday apartments) already represents an estimated €108 billion ($160 billion) annual market in Europe and is expected to grow further as the internet makes it easier to find specific items available for rent.[3] According to a poll by YouGov, 76% of people looking to rent would go to the internet first to find what they need; rising to 88% for those aged 25–34.[4]

It has been widely reported that the financial crisis of 2007–2010 may have contributed to the rapid growth of online rental marketplaces, such as erento, as consumers are more likely to consider renting instead of buying in times of financial hardship.[5] Environmental concerns, fast depreciation of goods, and a more transient workforce also mean that consumers are increasingly searching for rentals online.[3]

Net income received, or losses suffered, by an investor from renting of properties is subject to idiosyncratic risk due to the numerous things that can happen to real property and variable behavior of tenants.[7]

There is typically an implied, explicit, or written rental agreement or contract involved to specify the terms of the rental, which are regulated and managed under contract law.

Examples include letting out real estate (real property) for the purpose of housing tenure (where the tenant rents a residence to live in), parking space for a vehicle(s), storage space, whole or portions of properties for business, agricultural, institutional, or government use, or other reasons.

When renting real estate, the person(s) or party who lives in or occupies the real estate is often called a tenant, paying rent to the owner of the property, often called a landlord (or landlady). The real estate rented may be all or part of almost any real estate, such as an apartment, house, building, business office(s) or suite, land, farm, or merely an inside or outside space to park a vehicle, or store things all under Real estate law.

The tenancy agreement for real estate is often called a lease, and usually involves specific property rights in real property, as opposed to chattels.

In India, the rental income on property is taxed under the head "income from house property". A deduction of 30% is allowed from total rent which is charged to tax.

The time use of a chattel or other so called "personal property" is covered under general contract law, but the term lease also nowadays extends to long term rental contracts of more expensive non-Real properties such as automobiles, boats, planes, office equipment and so forth. The distinction in that case is long term versus short term rentals. Some non-real properties commonly available for rent or lease are:

In various degrees, renting can involve buying services for various amounts of time, such as staying in a hotel, using a computer in an Internet cafe, or riding in a taxicab (some forms of English use the term "hiring" for this activity).

As seen from the examples, some rented goods are used on the spot, but usually they are taken along; to help guarantee that they are brought back, one or more of the following applies:

If the customer has a credit account with the rental company, they may rent over several months (or years) and will receive a recurring or continuation invoice each rental period until they return the equipment. In this case deposits are rarely required.

Sometimes the risk that the good is kept is reduced by it being a special model or having signs on it that cannot easily be removed, making it obvious that it is owned by the rental company; this is especially effective for goods used in public places, but even when used at home it may help due to social control.

Persons and businesses that regularly rent goods from a particular company generally have an account with that company, which reduces the administrative procedure (transaction costs) on each occasion.

Signing out books from a library could be considered renting when there is a fee per book. However the term lending is more common.

Rental of personal property or real property for periods often longer than a year, which is governed by the signing of a lease, is known as leasing. Leasing is usually used for high-value capital equipment, both in business and by consumers. A lease in which the renter benefits from an increase in value of the asset is known as a finance lease. A leasing agreement which is not a finance lease is known as an operating lease.

A rental agreement may provide for the renter or lessee to become the owner of the asset at the end of the rental period, usually at the renter's option on payment of a nominal fee. Such arrangements may be known as

Look up rent in Wiktionary, the free dictionary.

Wikimedia Commons has media related to Renting.
Retrieved from "http://en.turkcewiki.org/w/index.php?title=Renting&oldid=1136478579"
This website is a mirror of Wikipedia, and is not affiliated with the Wikimedia Foundation.
Categories:
Hidden categories: