Gaston Bachelard (/bæʃəˈlɑːr/; French: [baʃlaʁ]; 27 June 1884 – 16 October 1962) was a French philosopher.[11] He made contributions in the fields of poetics and the philosophy of science. To the latter, he introduced the concepts of epistemological obstacle and epistemological break (obstacle épistémologique and rupture épistémologique). He influenced many subsequent French philosophers, among them Michel Foucault, Louis Althusser, Dominique Lecourt and Jacques Derrida, as well as the sociologists Pierre Bourdieu and Bruno Latour.[12]

For Bachelard, the scientific object should be constructed and therefore different from the positivist sciences; in other words, information is in continuous construction. Empiricism and rationalism are not regarded as dualism or opposition but complementary, therefore studies of a priori and a posteriori, or in other words reason and dialectic, are part of scientific research.[13]

Facade painted in homage to Gaston Bachelard, in Bar-sur-Aube, his birthplace.

Bachelard was a postal clerk in Bar-sur-Aube, and then studied physics and chemistry before finally becoming interested in philosophy. To obtain his doctorate (doctorat ès lettres) in 1927, he wrote two theses: the main one, Essai sur la connaissance approchée, under the direction of Abel Rey, and the complementary one, Étude sur l'évolution d'un problème de physique : la propagation thermique dans les solides, supervised by Léon Brunschvicg.

He first taught from 1902 to 1903 at the college of Sézanne, but turned away from teaching to consider a career in telegraphy. Literary by training, he took the technological path before moving towards science and mathematics. In particular, he was fascinated by the great discoveries of the end of the 19th century and the beginning of the 20th century (radioactivity, quantum and wave mechanics, relativity, electromagnetism and wireless telegraphy).[14]

In the English-speaking world, the connection Bachelard made between psychology and the history of science has been little understood. Bachelard demonstrated how the progress of science could be blocked by certain types of mental patterns, creating the concept of obstacle épistémologique ("epistemological obstacle"). One task of epistemology is to make clear the mental patterns at use in science, in order to help scientists overcome the obstacles to knowledge. Another goal is to “give back to human reason its function of agitation and aggressiveness” as Bachelard put it in ‘L'engagement rationaliste’ (1972).[16]

Bachelard was critical of Auguste Comte's positivism, which considered science as a continual progress. To Bachelard, scientific developments such as Einstein's theory of relativity demonstrated the discontinuous nature of the history of sciences. Thus models that framed scientific development as continuous, such as that of Comte and Émile Meyerson, seemed simplistic and erroneous to Bachelard.

Discharged in March 1919 and unemployed, Bachelard searched and obtained a job in October as a professor of physics and chemistry at the college of Bar-sur-Aube. His wife, Jeanne Rossi, a schoolteacher he had married in 1914, was transferred to Voigny. His daughter Suzanne was born on 18 October. He travelled the six kilometers to Bar-sur-Aube on foot every day, was provided a very useful education, and enrolled for a philosophy degree. Jeanne died in June 1920, and Bachelard raised his daughter alone.[17] At the age of thirty-six he began a completely unexpected philosophical career. Starting decisively in 1922, he acquired the title of Doctor of Letters at the Sorbonne in 1927. His theses, supported by Abel Rey and Léon Brunschvicg, were published.[18] He became a lecturer at the Faculty of Letters of Dijon from October 1927, but remained at the college of Bar-sur-Aube until 1930. He even participated in the municipal elections of 1929 to defend the project of a college for all.[19] He nevertheless accepted a professorship at the University of Burgundy when his daughter Suzanne entered the second degree.

He did the same when he was appointed to the Sorbonne as a university professor and director of the Institute for the History of Science and Technology in 1940, accompanying his daughter in her higher educations.[20]

On 25 August 1937 he was made a Knight of the Legion of Honor. He became a professor at the Sorbonne from 1940 to 1954. He held the chair of the history and philosophy of science, where he succeeded Abel Rey, director of the Institute of History and Philosophy of Science and Technology (IHST), which in 1992 became IHPST.[21][12]

The role of epistemology in science[edit] 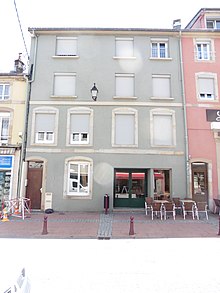 The building in rue de la Xavée in Remiremont, where Bachelard lived from 1903 to 1905.

Bachelard was a rationalist in the Cartesian sense, although he recommended his "non-Cartesian epistemology" as a replacement for the more standard Cartesian epistemology.[22] He compared "scientific knowledge" to ordinary knowledge in the way we deal with it, and saw error as only illusion: "Scientifically, one thinks truth as the historical rectification of a persistent error, and experiments as correctives for an initial, common illusion (illusion première)."[23]

The role of epistemology is to show the history of the (scientific) production of concepts. Those concepts are not just theoretical propositions: they are simultaneously abstract and concrete, pervading technical and pedagogical activity. This explains why "The electric bulb is an object of scientific thought… an example of an abstract-concrete object."[24] To understand the way it works, one has to take the detour of scientific knowledge. Epistemology is thus not a general philosophy that aims at justifying scientific reasoning. Instead, it produces regional histories of science.

Bachelard never saw how seemingly irrational theories often simply represented a drastic shift in scientific perspective. For instance, he never claimed that the theory of probabilities was just another way of complexifying reality through a deepening of rationality (even though critics like Lord Kelvin found this theory irrational).[25]

One of his main theses in The New Scientific Mind was that modern sciences had replaced the classical ontology of the substance with an "ontology of relations", which could be assimilated to something like a process philosophy. For instance, the physical concepts of matter and rays correspond, according to him, to the metaphysical concepts of the thing and of movement; but whereas classical philosophy considered both as distinct, and the thing as ontologically real, modern science can not distinguish matter from rays. It is thus impossible to examine an immobile thing, which was precisely the condition for knowledge according to the classical theory of knowledge (Becoming being impossible to be known, in accordance with Aristotle and Plato's theories of knowledge).

In non-Cartesian epistemology, there is no "simple substance" as in Cartesianism, but only complex objects built by theories and experiments and continuously improved (VI, 4). Intuition is therefore not primitive, but built (VI, 2). These themes led Bachelard to support a sort of constructivist epistemology.

In addition to epistemology, Bachelard's work deals with many other topics, including poetry, dreams, psychoanalysis, and the imagination. The Psychoanalysis of Fire (1938) and The Poetics of Space (1958) are among the most popular of his works: Jean-Paul Sartre cites the former and Bachelard's Water and Dreams in his Being and Nothingness (1943), and the latter had a wide reception in architectural theory circles, and continues to be influential in literary theory and creative writing. In philosophy, this nocturnal side of his work is developed by his student Gilbert Durand.

It should be noted, in his singular career, the concern which he had to ensure the development of his daughter, so much the time was marked by the cleavage of the sexes and the functions.[26] Going against sexist stereotypes, he wanted to make his daughter a scholar. Suzanne would be a mathematician and philosopher and would be able to develop phenomenological and epistemological research of high standing.[27]

Wikiquote has quotations related to Gaston Bachelard.
Retrieved from "http://en.turkcewiki.org/w/index.php?title=Gaston_Bachelard&oldid=1136952469"
This website is a mirror of Wikipedia, and is not affiliated with the Wikimedia Foundation.
Categories:
Hidden categories: