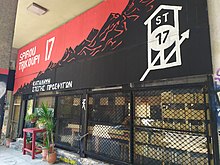 Athens refugee squats exist since the 2015 spike in the European migrant crisis, Greece has been a destination for migrants seeking refuge on the European continent via the "Balkan Route."[1] Coalitions of solidarity groups and migrants have established squats throughout Athens (mostly in Exarcheia) to house refugees, demonstrating an alternative to solutions offered by the European Union and NGOs.[2] The squats are grouped together in the Coordination of Refugee Squats. Notable projects included 5th School and City Plaza. In late 2019, the New Democracy party declared it would evict all the squats.

Following the 2008 financial crisis, a Greek government-debt crisis prompted the European Troika to implement austerity policies in the form of three distinct memoranda, despite public protest. Widespread poverty and unemployment led to unstable political conditions, and high percentages of housing and storefronts sat unoccupied.[3] Emerging as an alternative to and critique of EU policies and practices, activists in Greece have explored alternative solutions to the crisis of poverty faced by Greek citizens and have established networks of solidarity within the far-left movement.

Representing an unprecedented influx, upwards of one million migrants entered Greece seeking asylum in the European Union between 2015 and 2016, peaking with the arrival of over 200,000 refugees in October 2015.[4] Contributing factors include the escalation of the Syrian civil war and the subsequent closing of the Jordanian and Turkish borders with Syria.[4] EU member states adopted a variety of policy responses.[4] Balkan states were unable to control the migration via administrative mechanisms, opting to open a route deeper into Europe.[1] In August 2015, German Chancellor Angela Merkel opened the German border to asylum-seekers, voluntarily waiving the Dublin Regulation.[5] The 2015 Paris attacks further polarized member state positions on the refugee situation.[6] The Greek government lacked the capacity to process the arriving migrants, and under pressure from the European Commission, Greek Defense Minister Panos Kammenos allowed Frontex to assist with border management[5] and established "hotspots" for processing refugees. It is proposed that this approach ensures the safety of local populations and migrants, by creating safer travel paths into Europe while tightly controlling where they can go.[7] In practice, these administrative solutions have created new dangers for migrants, allowing deportation to unsafe countries and enabling their indefinite detention under poor and sometimes dangerous conditions in official camps.[8]

Greek solidarity networks were activated in support of the migrants after the 2015 arrivals. Police evictions of newly arrived migrants from public spaces around Victoria Square drew activists to provide resources and support refugee-led protests and hunger strikes. Nearby Pedion tou Areos Park, occupied by newly arrived migrants, was similarly cleared by police. Following the evictions of the public occupations, solidarity groups assisted in securing abandoned spaces as squats for refugee settlement. In mid-2017, it was estimated that between 2500 and 3000 migrants were housed in squats in Athens.[9] In August 2018, an informal survey suggested there were 850 people (of which total, 30% were children and 40% female) living in Athens' six refugee squats.[10]

Most squats are firmly based on principles of anti-racism, self-management, direct democracy and non-hierarchical organisation. [11] Further the squats can be broken into four categories:[12]

A Greek court ruled in 2017 that three squats (City Plaza, Papouchadiko and Zoodochou Pigis 119) should be evicted. Athens Mayor Giorgos Kaminis backed this decision, saying that the refugee crisis "does not legitimise anyone occupying arbitrarily public or private buildings to house those persons." In protest, 700 people marched from City Plaza to the Ministry of Migration at Klafthmonos Square. Solidarity actions supporting the squats were held outside Greek embassies in Austria, Belgium and Germany.[13]

Several squats were evicted in April 2019, including three refugee squats (Azadi, Clandestina and New Babylon). Fifty evicted refugees set up a tent camp outside the Greek Parliament at Syntagma Square. After a few days they agreed to be moved to the official Elaionas camp.[14] At the end of August 2019, police arrested around 100 people in dawn raids on squats. New mayor Kostas Bakoyannis had promised to take action and criticised previous mayor Kaminis for being too soft.[15] One month previously, the freshly elected new Prime Minister (and uncle of Bakoyannis) Kyriakos Mitsotakis of the New Democracy party had promised to impose order on the district of Exarcheia.[15] This central districts houses at least 23 anarchist and migrant squats, and has long been the base for Greece’s radical left social movements.[16] By the end of September 2019, there had been seven evictions including 5th School and Spirou Trikoupi.[17][18]

The Ministry of Citizen’s Protection released a statement on 20 November 2019 that declared ”Those who have illegally occupied buildings, public or private, are urged to evacuate them [...] The deadline for evacuation is fifteen days after the publication of this press release.”[19] Commentators termed this an ultimatum and noted that the deadline would run out on 5 December. On this date, Alexandros Grigoropoulos was killed by police, an event which sparked the 2008 Greek riots. When the day came, the squats refused to leave and marches in tribute to Grigoropoulos were held in 18 cities.[19][20][21] The evictions were broadened from migrant squats to anarchist social centres[22] When a Christmas tree was erected on Exarcheia Square by New Democracy in December 2019, it was burned down by anarchists in solidarity with people who had been recently evicted. A replacement tree was erected and burnt down several hours later.[23]

In May 2020, the Themistokleus 58 was evicted. About 50 refugees, mainly from the Congo and Syria, were escorted out of the building.[24]

The squats of City Plaza, Notara 26, Oniro, Spirou Trikoupi, Arahovis, 5th School, Jasmin School and Acarchon 22 have banded together into an organization called the Coordination of Refugee Squats.[25] In 2016, the Coordination group stated “As long as they try to evict the squats, as long as they build camps and detention centers, as long as there are borders - we will also be there to fight back and fight for a better world! We will show them again what we already proved, we live together, we struggle and we resist together – to defend the dignity of each individual, to defend our principles of solidarity.”[26]

The 5th School Likio squat was located in Exarcheia. In 2018 it housed around 200 refugees, mainly families. It is self-managed, with residents volunteering to distribute food donations and to run the squat. Representatives of NGOs are not welcome.[10] The self-organisation means that a Syrian former information technology worker set up the wifi network, an Arabic teacher from Syria gives weekly lessons and someone who studied hotel management in Damascus works in the kitchen.[27]

The squat was evicted in September 2019. Amongst the 143 evicted migrants were women and children from Afghanistan, Iran, Iraq and Syria. They were taken to the Corinth camp, south of Athens. Parents' associations and teachers demanded the return of 12 children who were taken out of local schools.[28]

A coalition of migrant solidarity activists called 'The Solidarity Initiative to Economic and Political Refugees' opened the City Plaza squat on April 22, 2016.[29] The former City Plaza Hotel at 78 Acharnon, in Exarcheia, had closed its doors in 2010.[30] Activists and refugees coordinated to organize and maintain the Hotel as an alternative to state-run camps, focused on promoting the autonomy and political agency of the residents.[31] The City Plaza squat demanded rights for its residents while also producing these rights in the everyday life of the occupation.[32] The squat self-defined itself as Refugee Accommodation and Solidarity Space City Plaza.[33]

Refugees and the associated solidarity groups closed the squat on July 10, 2019, two days after the electoral win of right-wing New Democracy. It was a priority of the newly incubated minister, Michalis Chrisochoidis to force refugees out of the squat. An announcement from the solidarity group stated that refugees were provided shelter elsewhere.[34][35][36]

Housing Squat for Refugees and Immigrants Notara 26 (named for its address) was the first empty building to be opened as a migrant shelter in Exarcheia in September 2015. The former tax administration offices houses people from countries such as Afghanistan, Algeria, Iran, Morocco and Syria.[37] By summer 2016, it had housed 3500 people.[38] It operated on anti-authoritarian principles and refused to co-operate with NGOs. By 2019, it had provided accommodation for over 9000 people.[16]

Spirou Trikoupi was a squatted building in Exarcheia. It housed around ninety migrants from places such as Afghanistan, Eritrea, Iran and Kurdistan. The squat was run by a regular weekly assembly and had a bar, a library and classrooms for children. In August 2019, Spirou Trikoupi was the first squat to be raided under the policy of newly elected Kostas Bakoyannis. It was evicted by police and the migrants were taken away at gunpoint. Undocumented people were taken to detention centers and the asylum seekers were put in tent camps.[18]

Greece
Retrieved from "http://en.turkcewiki.org/w/index.php?title=Athens_refugee_squats&oldid=1087478268"
This website is a mirror of Wikipedia, and is not affiliated with the Wikimedia Foundation.
Categories:
Hidden categories: