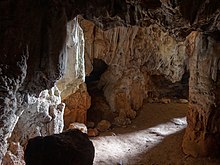 Inside the Trapeza Cave

One author, Tyree (1974), restricts "sacred caves" to those with architectural additions such as "paved areas, partition walls, and low walls surrounding stalagmites", as well as the presence (upon excavation) of "cult implements" of various kinds.[1] 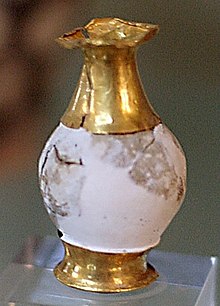 Vessel made from an egg with gold fittings, found in the Kamares Cave

Some were "burial caves", used in the Neolithic and Early Minoan periods as secondary burial sites for a community. It is thought that the primary burial site was probably a tholos beehive tomb in the area, from which remains were moved into the cave after a period. Whether this usage overlapped with usage for religious cult, or whether the two phases were distinct, is uncertain and a matter of discussion.[2]

Retrieved from "http://en.turkcewiki.org/w/index.php?title=Sacred_caves_of_Crete&oldid=1046558438"
This website is a mirror of Wikipedia, and is not affiliated with the Wikimedia Foundation.
Categories:
Hidden categories: