Gloria Jean Watkins (September 25, 1952 – December 15, 2021), better known by her pen name bell hooks,[1] was an American author and social activist who was Distinguished Professor in Residence at Berea College. She is best known for her writings on race, feminism, and class.[2][3] The focus of hooks's writing was to explore the intersectionality of race, capitalism, and gender, and what she described as their ability to produce and perpetuate systems of oppression and class domination. She published around 40 books, including works that ranged from essays and poetry to children's books. She published numerous scholarly articles, appeared in documentary films, and participated in public lectures. Her work addressed love, race, class, gender, art, history, sexuality, mass media, and feminism.[4]

She began her academic career in 1976 teaching English and ethnic studies at the University of Southern California. She later taught at several institutions including Stanford University, Yale University, and The City College of New York, before joining Berea College in Berea, Kentucky, in 2004,[5] where she founded the bell hooks Institute in 2014.[6] Her pen name was borrowed from her maternal great-grandmother, Bell Blair Hooks.[7]

Gloria Jean Watkins was born on September 25, 1952, in Hopkinsville,[8] a small, segregated town in Kentucky,[9] to a working-class African-American family. Watkins was one of six children born to Rosa Bell Watkins (née Oldham) and Veodis Watkins.[4] Her father worked as a janitor and her mother worked as a maid in the homes of white families.[4] In her memoir Bone Black: Memories of Girlhood (1996), Watkins would write of her "struggle to create self and identity" while growing up in "a rich magical world of southern black culture that was sometimes paradisiacal and at other times terrifying."[10]

An avid reader (with poets William Wordsworth, Langston Hughes, Elizabeth Barrett Browning and Gwendolyn Brooks among her favorites),[11] Watkins was educated in racially segregated public schools, later moving to an integrated school in the late 1960s.[12] She graduated from Hopkinsville High School before obtaining her BA in English from Stanford University in 1973,[13] and her MA in English from the University of Wisconsin–Madison in 1976.[14] During this time, Watkins was writing her book Ain't I a Woman: Black Women and Feminism, which she began at the age of 19 (c. 1971)[15] and then published in 1981.[3]

In 1983, after several years of teaching and writing, she completed her doctorate in English at the University of California, Santa Cruz, with a dissertation on author Toni Morrison entitled "Keeping a Hold on Life: Reading Toni Morrison's Fiction".[16][17]

She began her academic career in 1976 as an English professor and senior lecturer in ethnic studies at the University of Southern California.[18] During her three years there, Golemics, a Los Angeles publisher, released her first published work, a chapbook of poems titled And There We Wept (1978),[19] written under the name "bell hooks". She had adopted her maternal great-grandmother's name as her pen name because, as she later put it, her great-grandmother "was known for her snappy and bold tongue, which I greatly admired".[7] She also said she put the name in lowercase letters both to honor her great-grandmother[20] and to convey that what is most important to focus upon is her works, not her personal qualities: the "substance of books, not who I am".[21] On the unconventional lowercasing of her pen name, hooks added that, "When the feminist movement was at its zenith in the late '60s and early '70s, there was a lot of moving away from the idea of the person. It was: Let's talk about the ideas behind the work, and the people matter less... It was kind of a gimmicky thing, but lots of feminist women were doing it."[22]

In the early 1980s and 1990s, hooks taught at several post-secondary institutions, including the University of California, Santa Cruz, San Francisco State University, Yale (1985 to 1988, as assistant professor of African and Afro-American studies and English),[23] Oberlin College (1988 to 1994, as associate professor of American literature and women's studies), and, beginning in 1994, as distinguished professor of English at City College of New York.[24][25]

South End Press published her first major work, Ain't I a Woman? Black Women and Feminism, in 1981, though she had written it years earlier while still an undergraduate.[12] In the decades since its publication, Ain't I a Woman? has been recognized for its contribution to feminist thought, with Publishers Weekly in 1992 naming it "One of the twenty most influential women's books in the last 20 years."[26] Writing in The New York Times in 2019, Min Jin Lee said that Ain't I a Woman "remains a radical and relevant work of political theory. She lays the groundwork of her feminist theory by giving historical evidence of the specific sexism that black female slaves endured and how that legacy affects black womanhood today."[23] Ain't I a Woman? examines themes including the historical impact of sexism and racism on black women, devaluation of black womanhood,[27] media roles and portrayal, the education system, the idea of a white-supremacist-capitalist-patriarchy and the marginalization of black women.[28] 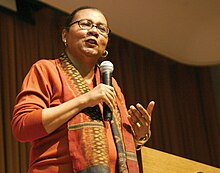 At the same time, hooks became significant as a leftist and postmodern political thinker and cultural critic.[29] She published more than 30 books,[2] ranging in topics from black men, patriarchy, and masculinity to self-help; engaged pedagogy to personal memoirs; and sexuality (in regards to feminism and politics of aesthetics and visual culture). Reel to Real: race, sex, and class at the movies (1996) collects film essays, reviews, and interviews with film directors.[30] In The New Yorker, Hua Hsu said these interviews displayed the facet of hooks's work that was "curious, empathetic, searching for comrades".[4]

In Feminist Theory: From Margin to Center (1984), hooks develops a critique of white feminist racism in second-wave feminism, which she argued undermined the possibility of feminist solidarity across racial lines.[31]

As hooks argued, communication and literacy (the ability to read, write, and think critically) are necessary for the feminist movement because without them people may not grow to recognize gender inequalities in society.[32]

In 2002, hooks gave a commencement speech at Southwestern University. Eschewing the congratulatory mode of traditional commencement speeches, she spoke against what she saw as government-sanctioned violence and oppression, and admonished students who she believed went along with such practices.[33][34] The Austin Chronicle reported that many in the audience booed the speech, though "several graduates passed over the provost to shake her hand or give her a hug."[33]

In 2004, she joined Berea College as Distinguished Professor in Residence.[35] Her 2008 book, belonging: a culture of place, includes an interview with author Wendell Berry as well as a discussion of her move back to Kentucky.[36] She was a scholar in residence at The New School on three occasions, the last time in 2014.[37] Also in 2014, the bell hooks Institute was founded at Berea College,[3] where she donated her papers in 2017.[38]

During her time at Berea College, hooks also founded the bell hooks center along with professor Dr. M. Shadee Malaklou.[39] The center was established to provide underrepresented students, especially black and brown, femme, queer, and Appalachian individuals at Berea College, a safe space where they can develop their activist expression, education, and work.[40] bell hooks’ work and her emphasis on the importance of feminism and love serves as the inspiration and guiding principles of the center and the education it offers. The center continues to operate today and offers events and programming with an emphasis on radical feminist and anti-racist thought.[39]

Regarding her sexual identity, hooks described herself as "queer-pas-gay".[42][43][44] She used the term "pas" from the French language, translating to "not" in the English language. hooks describes being queer in her own words as "not who you're having sex with, but about being at odds with everything around it".[45]  She states, "As the essence of queer, I think of Tim Dean's work on being queer and queer not as being about who you're having sex with – that can be a dimension of it – but queer as being about the self that is at odds with everything around it and it has to invent and create and find a place to speak and to thrive and to live."[46]

During an interview with Abigail Bereola in 2017, hooks revealed to Bereola that she was single while they discussed her love life. During the interview, hooks told Bereola, "I don't have a partner. I've been celibate for 17 years. I would love to have a partner, but I don't think my life is less meaningful."[47]

Through her interest in Beat poetry and after an encounter with the poet and Buddhist Gary Snyder, hooks was first introduced to Buddhism in her early college years[48] She described herself as finding Buddhism as part of a personal journey in her youth, centered around seeking to recenter love and spirituality in her life and configure these concepts into her focus on activism and justice.[49] After her initial exposures to Buddhism, hooks incorporated it into her Christian upbringing and this combined Christian-Buddhist thought influenced her identity, activism, and writing for the remainder of her life.[50]

She was drawn to Buddhism because of the personal and academic framework it offered her to understand and respond to suffering and discrimination as well as love and connection. She describes the Christian-Buddhist focus on everyday practice as fulfilling the centering and grounding needs of her everyday life.[51]

Buddhist thought, especially the work of Thích Nhất Hạnh, appears in multiple of hooks' essays, books, and poetry.[50] Buddhist spirituality also played an significant role in the creation of hooks' love ethic which became a major focus in both her written work and her activism.[52]

bell hooks at Wikipedia's sister projects
Retrieved from "http://en.turkcewiki.org/w/index.php?title=Bell_hooks&oldid=1137049095"
This website is a mirror of Wikipedia, and is not affiliated with the Wikimedia Foundation.
Categories:
Hidden categories: