Jump to navigation Jump to search
Not to be confused with tuff, a porous volcanic rock also called 'tufa'.
For other uses, see Tufa (disambiguation).
Porous limestone rock formed when carbonate minerals precipitate out of ambient temperature water

Tufa is a variety of limestone formed when carbonate minerals precipitate out of ambient temperature water. Geothermally heated hot springs sometimes produce similar (but less porous) carbonate deposits, which are known as travertine. Tufa is sometimes referred to as (meteogene) travertine.[1] It should not be confused with hot spring (thermogene) travertine. Tufa, which is calcareous, should not be confused with tuff, a porous volcanic rock with a similar etymology that is sometimes also called "tufa".

Modern and fossil tufa deposits abound with wetland plants;[2] as such, many tufa deposits are characterised by their large macrobiological component, and are highly porous. Tufa forms either in fluvial channels or in lacustrine environments. Ford and Pedley (1996)[3] provide a review of tufa systems worldwide.

Deposits can be classified by their depositional environment (or otherwise by vegetation or petrographically). Pedley (1990)[4] provides an extensive classification system, which includes the following classes of fluvial tufa: 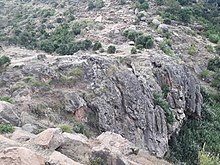 Rubaksa tufa plug, after drying of the river, in Ethiopia

Lacustrine tufas are generally formed at the periphery of lakes and built-up phytoherms (freshwater reefs), and on stromatolites. Oncoids are also common in these environments.

While fluvial and lacustrine systems make up the bulk of tufa systems worldwide, there are several other important tufa environments.

Although sometimes regarded as a distinct carbonate deposit, calcareous sinter formed from ambient temperature water can be considered a sub-type of tufa.

Calcareous speleothems may be regarded as a form of calcareous sinter. They lack any significant macrophyte component due to the absence of light, and for this reason they are often morphologically closer to travertine or calcareous sinter. 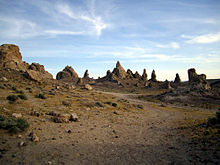 Tufa columns are an unusual form of tufa typically associated with saline lakes. They are distinct from most tufa deposits in that they lack any significant macrophyte component, due to the salinity excluding mesophilic organisms.[3] Some tufa columns may actually form from hot-springs, and may therefore constitute a form of travertine. It is generally thought that such features form from CaCO3 precipitated when carbonate rich source waters emerge into alkaline soda lakes. They have also been found in marine settings in the Ikka fjord of Greenland where the Ikaite columns can reach up to 18 m (59 ft) in height.[5]

Tufa deposits form an important habitat for a diverse flora. Bryophytes (mosses, liverworts etc.) and diatoms are well represented. The porosity of the deposits creates a wet habitat ideal for these plants. 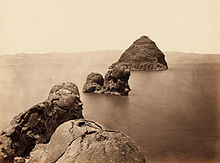 Modern tufa is formed from alkaline waters, supersaturated with calcite. On emergence, waters degas CO2 due to the lower atmospheric pCO2 (see partial pressure), resulting in an increase in pH. Since carbonate solubility decreases with increased pH,[6] precipitation is induced. Supersaturation may be enhanced by factors leading to a reduction in pCO2, for example increased air-water interactions at waterfalls may be important,[7] as may photosynthesis.[8]

Recently it has been demonstrated that microbially induced precipitation may be more important than physico-chemical precipitation. Pedley et al. (2009)[9] showed with flume experiments that precipitation does not occur unless a biofilm is present, despite supersaturation.

Calcite is the dominant mineral precipitate found; however, the polymorph aragonite is also found. 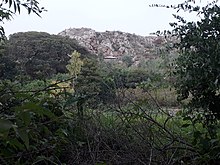 Tufa is common in many parts of the world. Some notable deposits include:

Some sources suggest that "tufa" was used as the primary building material for most of the châteaux of the Loire Valley, France. This results from a mis-translation of the terms "tuffeau jaune" and "tuffeau blanc", which are porous varieties of the Late Cretaceous marine limestone known as chalk.[10][need quotation to verify][11][failed verification]

Retrieved from "http://en.turkcewiki.org/w/index.php?title=Tufa&oldid=932634765"
This website is a mirror of Wikipedia, and is not affiliated with the Wikimedia Foundation.
Categories:
Hidden categories: