Australopithecus sediba is a species of Australopithecus of the early Pleistocene, identified based on fossil remains dated to about 2 million years ago. Morphologically, A. sediba is distinct from but still closely related to both Homo habilis and Australopithecus africanus.[2] It is therefore of interest as a candidate for a transitional species in the emergence of the Homo (human) genus.

The species A. sediba is postulated on the basis of six partial skeletons discovered in the Malapa Fossil Site at the Cradle of Humankind World Heritage Site in South Africa. The holotype was dubbed MH1 (Malapa hominin 1), a juvenile male also named "Karabo".[3] MH2, the paratype, is an adult female. The other remains are those of an adult male, and of three infants.[1][4] The fossils were found together at the bottom of the Malapa Cave, where they apparently fell to their death, and have been dated to 1.98 million years ago.[5] The partial skeletons were initially described as a newly discovered species in 2010, based on a total of some 220 bone fragments. The name sediba was taken from the word for "natural spring" or "well" in the Sotho language.[1] 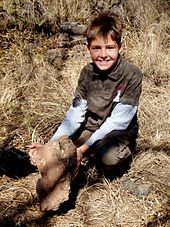 Matthew Berger displaying the fossil he found on the Malapa Nature Reserve.

The first specimen of A. sediba was found by paleoanthropologist Lee Berger's nine-year-old son, Matthew, on August 15, 2008. While exploring near his father's dig site in the dolomitic hills north of Johannesburg, on the Malapa Nature Reserve, Matthew stumbled upon a fossilized bone. The boy alerted his father to the find, who could not believe what he saw—a hominid clavicle. Upon turning the block over, "sticking out of the back of the rock was a mandible with a tooth, a canine, sticking out. And I almost died", he later recalled.[6] The fossil turned out to belong to a 4 ft 2 in (1.27 m) juvenile male, whose skull was discovered in March 2009 by Berger's team.[6] The find was announced to the public on April 8, 2010.

Also found at the Malapa archeological site were a variety of animal fossils, including saber-toothed cats, mongooses, and antelopes.[6] Berger and geologist Paul Dirks speculated that the animals might have fallen into a deep 100–150-foot (30–46 m) "death-trap", perhaps lured by the scent of water.[6] The bodies may have then been swept into a pool of water with a sandy bottom and rich with lime, allowing the remains to become fossilized.[6]

MH1 is disarticulated and 34% complete if skeletal elements known to be in an unprepared block are included (59.6% if small elements are excluded) while MH2 is 45.6% complete (again 59.6% excluding small elements) and exhibits partial articulation.[7]

The fossil was dated using a combination of palaeomagnetism and uranium–lead (U-Pb) dating which showed that the fossils are no older than ~2.0 Ma. The presence of animal species which became extinct at ~1.5 Ma indicates the deposit is no younger than 1.5 Ma. The sediments have a 'normal' magnetic polarity and the only major period between 2.0 and 1.5 Ma when this occurred is the Olduvai sub-Chron between 1.95 and 1.78 Ma.[5] Accordingly, the fossils were originally dated to ~1.95 Ma. Recent dating of a capping flowstone demonstrated this was not possible and the normal magnetic polarity sediments have since been correlated to the 3,000-year-long Pre-Olduvai event at ~1.977 Ma.

The conditions in which the individuals were buried and fossilized were extraordinary, permitting the extraction of plant phytoliths from dental plaque.[8] Based on this, it seems that Australopithecus sediba may have lived in savannas but ate fruit and other foods from the forest, similar to the behavior of modern-day savanna chimpanzees.

Because of the wide range of mosaic features exhibited in both cranial and post-cranial morphology, the authors suggest that A. sediba may be a transitional species between the southern African A. africanus (the Taung Child, Mrs. Ples) and either Homo habilis or even the later H. erectus (Turkana boy, Java man, Peking man).[1] 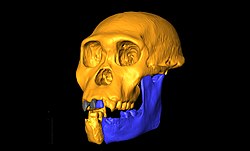 A reconstruction of the skull of A. sediba holotype MH1, or Karabo

The cranial capacity of MH1, which has been estimated to be at 95% of adult capacity (420 cm3), is at the higher end of the range for A. africanus and far from the lower range of early Homo (631 cm3), but the mandible and tooth size are quite gracile and similar to what one would expect to find in H. erectus; so similar are these features that, if found in isolation without other skeletal remains, they could be classified as Homo based on tooth and mandible size. However, the cusp spacing is more like Australopithecus.

Regardless of whether A. sediba is a direct ancestor of early Homo or not, our understanding of the range of variation in early hominins has been greatly increased with the finding of these new specimens.

Australopithecus sediba compared to its ancestor species A. africanus on the whole is described by Berger et al. as more derived towards Homo than A. garhi, especially showing a number of synapomorphies taken to anticipate the reorganization of the pelvis in H. erectus, associated with "more energetically efficient walking and running". The femur and tibia are fragmentary, but the foot combines an advanced anklebone combined with a primitive heel.[9] Its cranial capacity is estimated at around 420–450 cm3 (26–27 cu in),[1] about one-third of that of modern humans (1,200 cm3 (73 cu in)). 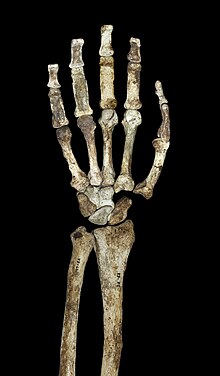 Palmar view of the hand and forearm of A. sediba paratype MH2.

A. sediba had a surprisingly modern hand, whose precision grip suggests it might have been another tool-making Australopithecus. Evidence of the precision gripping and stone tool production can be seen from Homo-like features such as having a long thumb and short fingers.[10][11] The nearly complete wrist and hand of an adult female from Malapa, South Africa presents Australopithecus-like features, such as a strong flexor apparatus associated with arboreal locomotion.[10]

A well-preserved and articulated ankle of A. sediba is mostly humanlike in form and function and possesses some evidence for a humanlike arch and Achilles tendon. However, A. sediba is apelike in possessing a more gracile calcaneal body and a more robust medial malleolus than expected. This shows that A. sediba may have practiced a unique combination of bipedalism and arboreality.[12]

As opposed to the authors of the initial description, who interpreted both fossils as a possible transitional species between Australopithecus and Homo, other palaeoanthropologists are reluctant to do so. In an accompanying news article published with the initial descriptions in 2010, detractors of the idea that A. sediba might be ancestral to the genus Homo (e.g. Tim White and Ron Clarke) suggest that the fossils could be a late southern African branch of Australopithecus, coexisting with already existing members of the genus Homo.[13]

This interpretation is based on the observation that the lower jaw, discovered by Friedemann Schrenk, of a 2.5-million-year-old fossil attributed to H. rudolfensis is the second-oldest-known fossil ascribed to the genus Homo behind LD 350-1. This specimen is thus presumed to be older than the Australopithecus sediba fossils. These critics continue to ascribe to A. africanus the status of precursor to the genus Homo. Criticism has been raised about the authors of the initial description's conclusions in a news report in the journal Nature, suggesting that the authors failed to take into account the wealth of variation within A. africanus when defining the finds as an independent species.[14]

Retrieved from "http://en.turkcewiki.org/w/index.php?title=Australopithecus_sediba&oldid=964275597"
This website is a mirror of Wikipedia, and is not affiliated with the Wikimedia Foundation.
Categories:
Hidden categories: