Zigomar was a Yugoslav adventure comic strip about the masked hero of the same name, created by artist Nikola Navojev and writer Branko Vidić. Zigomar appeared in six stories published in comic magazine Mikijevo carstvo (Mickey's Kingdom) from 1939 to 1941 and has been called one of the most notable titles of the "Golden Age of Serbian comics".[1]

Zigomar was originally created by artist Nikola Navojev, a white émigré, and writer Branko Vidić. The biggest influence on Navojev and Vidić was the Phantom, but they were also influenced by other masked heroes, like Lone Ranger, which appeared in Yugoslav comic magazines during the 1930s.[2] Zigomar got his name from the more famous French character of the same name, hero of pulp fiction novels and films.[3] Serbian cartoonist Aleksandar Zograf and comic book artist and historian Zdravko Zupan suggest that the idea to name the character after the French Zigomar might have come from the owner and editor of the comic magazine Mikijevo carstvo, Milutin S. Ignjačević, who studied filmmaking in Prague and Munich and was one of Yugoslavia's early filmmakers.[3][4] 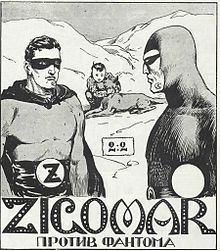 In one of his adventures, in the Himalayas, Zigomar meets the Phantom. The two get in a fight, but soon after they show respect for each other and become friends. However, at one point, an evil fakir hypnotizes them and turns them against each other once again. The story continues with new clashes between the two heroes, until Zigomar sets captured Phantom free. The two part, showing respect but also animosity for each other.[2]

During the time period Zigomar was published, it was very well received by many readers: all the copies of Mikijevo carstvo issue in which the beginning of the first Zigomar story was published were sold out immediately, and the interest was so big that the magazine editors offered the readers which did not get a copy to send them the part of the magazine with Zigomar comic for free.[3]

"Zigomar protiv Fantoma" in the 1970s saw huge attention by The Phantom fans in the United States.[8] During the decade, Belgrade lawyer Dragiša Jovović, a comic book collector and The Phantom fan, got in touch with Ed Rhoades, the president of the American Phantom fan club. Jovović sent issues of The Phantom published in Yugoslavia to Rhoades, and at one point sent him a copy of "Zigomar protiv Fantoma".[8] Jovović stated: "When the Phantom fan club received the copy, it caused a real sensation. They immediately held a meeting of the board of directors, probably by phone. Ed later asked me about the artist, and said that his drawings were exquisite."[8] There are, however, no records of the official release of the story in the United States.[5]

A number of works by Serbian painter Uroš Đurić were inspired by Zigomar.[14]

Retrieved from "http://en.turkcewiki.org/w/index.php?title=Zigomar&oldid=1039292410"
This website is a mirror of Wikipedia, and is not affiliated with the Wikimedia Foundation.
Categories:
Hidden categories: