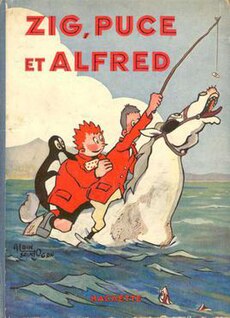 Zig et Puce is a Franco-Belgian comics series created by Alain Saint-Ogan in 1925 that became popular and influential over a long period. After ending production, it was revived by Greg for a second successful publication run.

Zig and Puce, the thin and the chubby one, respectively, are two teenagers who frequently experience adventures. On an expedition to the North Pole they meet their pet auk, Alfred. Their adventures are often exotic, and occasionally fantastic in nature, leading to destinations such as Venus or the future.

Zig et Puce first appeared in the Dimanche Illustré, weekly supplement of the French newspaper l'Excelsior, on 3 May 1925.[1][2] The third major character, Alfred, made his first appearance on 25 December 1925.[3] The series' style was influenced by the Art-Deco design of the period, and its engaging stories are suggested to be the main reason for its wide appeal among both adults and youth, and the subsequent success of the series.[4] It is also considered the earliest French comic strip to employ speech bubbles, the device which was popularized by The Yellow Kid.[5] After a long run of serial and album publications, Saint-Ogan ceased to produce the series in 1954.

The series was later revived by Greg who, with the consent of Saint-Ogan, resumed production in the Franco-Belgian comics magazine Tintin.[5][6] It was first published on 26 March 1963 and continued serial publication until 1969.[7]

As a seminal comic strip in the bande dessinée culture, although appearing several years after Les Pieds Nickelés, Zig et Puce made an influential impact a few years before the debut of Hergé and The Adventures of Tintin.[4][8] The character of Alfred is also considered a pioneering central animal character, in the tradition of Franco-Belgian comics animals such as Milou (Snowy), Spip, Jocko, Jolly Jumper, Marsupilami and Idéfix (Dogmatix).

Alfred the auk was chosen as mascot by Charles Lindbergh when he landed in Paris on board the Spirit of St. Louis on the arrival of his first transatlantic flight in May 1927. There, an American lady gave him a plush effigy of Alfred, which Lindergh took with him in his flight from Paris to Brussels.

The character Alfred was chosen as the mascot of the 1974 Angoulême Comics Festival, and the name given to an award.[9] The term Alfred was used until 1989 when it was renamed Alph'art[10] (in honor of the last Adventures of Tintin comic Tintin and Alph-Art). 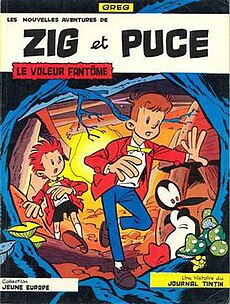 Lists French album titles, titles translated into English, the first year of publication in album format, and the date of republication by Glénat. At least for the first nine albums, the republished Glénat versions have between 1 and 24 pages not included in the originals.

Lists French titles, titles translated into English, and the first year of publication in album format.

Retrieved from "http://en.turkcewiki.org/w/index.php?title=Zig_et_Puce&oldid=1082124684"
This website is a mirror of Wikipedia, and is not affiliated with the Wikimedia Foundation.
Categories:
Hidden categories: