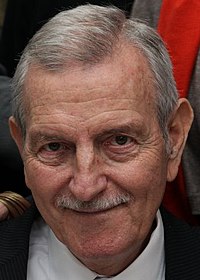 He served as the chairman of the First International Bank of Israel, the fifth largest bank in Israel, between 1987 and 2000, followed by becoming Chairman of F.I.B.I Holdings Ltd.; Chairman of the Board of Governors of the Hebrew University; and Chairman of Arkia Israel Airlines, the second largest airliner in Israel, of which he was reported to own almost 20%.

Arnon was known to represent the Safra brothers' Israeli interests and has represented Ehud Olmert[2] and Aryeh Deri in the past.[3]

Retrieved from "http://en.turkcewiki.org/w/index.php?title=Yigal_Arnon&oldid=1071946072"
This website is a mirror of Wikipedia, and is not affiliated with the Wikimedia Foundation.
Categories:
Hidden categories: