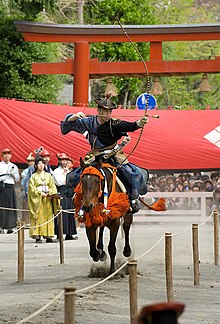 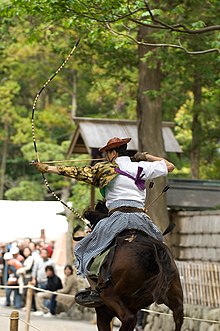 This style of archery has its origins at the beginning of the Kamakura period. Minamoto no Yoritomo became alarmed at the lack of archery skills his samurai possessed. He organized yabusame as a form of practice.

Nowadays, the best places to see yabusame performed are at the Tsurugaoka Hachiman-gū in Kamakura and Shimogamo Shrine in Kyoto (during Aoi Matsuri in early May). It is also performed in Samukawa and on the beach at Zushi, as well as other locations.

Japanese bows date back to prehistoric times – the Jōmon period. The long, unique asymmetrical bow style with the grip below the center emerged under the Yayoi culture (300 BC – 300 AD). Bows became the symbol of authority and power. The legendary first emperor of Japan, Emperor Jimmu, is always depicted carrying a bow.

Some Emishi tribes, noteworthy the Hitakami tribe, practice horse archery and were noticed and feared from the Yamato court.[1]

The use of the bow had been on foot until around the 4th century when elite soldiers took to fighting on horseback with bows and swords. In the 10th century, samurai would have archery duels on horseback. They would ride at each other and try to shoot at least three arrows. These duels did not necessarily have to end in death, as long as honor was satisfied. One of the most famous and celebrated incidents of Japanese mounted archery occurred during the Genpei War (1180–1185), an epic struggle for power between the Minamoto and Taira clans that was to have a major impact on Japanese culture, society, and politics.

At the Battle of Yashima, the Heike, having been defeated in battle, fled to Yashima and took to their boats. They were fiercely pursued by the Genji on horseback, but the Genji were halted by the sea.

As the Heike waited for the winds to be right, they presented a fan hung from a mast as a target for any Genji archer to shoot at in a gesture of chivalrous rivalry between enemies.

One of the Genji samurai, Nasu no Yoichi, accepted the challenge. He rode his horse into the sea and shot the fan cleanly through. Nasu won much fame and his feat is still celebrated to this day.

During the Kamakura period (1192–1334), mounted archery was used as a military training exercise to keep samurai prepared for war. Those archers who did poorly might find themselves commanded to commit seppuku, or ritual suicide.

One style of mounted archery was inuoumono – shooting at dogs.[2] Buddhist priests were able to prevail upon the samurai to have the arrows padded so that the dogs were only annoyed and bruised rather than killed. This sport is no longer practiced. 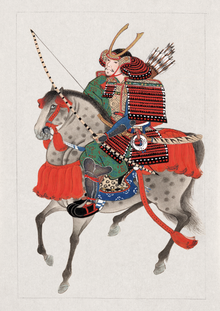 A mounted samurai with bow & arrows, wearing a horned helmet. Circa 1878.

Yabusame was designed as a way to please and entertain the myriad of gods that watch over Japan, thus encouraging their blessings for the prosperity of the land, the people, and the harvest.

A yabusame archer gallops down a 255-metre-long (280 yd) track at high speed. The archer mainly controls his horse with his knees, as he needs both hands to draw and shoot his bow. As he approaches a target, he brings his bow up and draws the arrow past his ear before letting the arrow fly with a deep shout of In-Yo-In-Yo (darkness and light). The arrow is blunt and round-shaped in order to make a louder sound when it strikes the board.

Experienced archers are allowed to use arrows with a V-shaped prong. If the board is struck, it will splinter with a confetti-like material and fall to the ground. To hit all three targets is considered an admirable accomplishment. Yabusame targets and their placement are designed to ritually replicate the optimum target for a lethal blow on an opponent wearing full traditional samurai armor (O-Yoroi) which left the space just beneath the helmet visor bare.

Yabusame is characterized as a ritual rather than a sport because of its solemn style and religious aspects, and is often performed for special ceremonies or official events, such as entertaining foreign dignitaries and heads of state. Yabusame demonstrations have been given for the formal visits of US Presidents Ronald Reagan, George W. Bush, and Barack Obama. A yabusame demonstration was given in the United Kingdom for Prince Charles, who reportedly was fascinated and pleased with the performance.

To be selected as a yabusame archer is a great honor. In the past, they were chosen from only the best warriors. The archer who performs the best is awarded a white cloth, signifying divine favor. 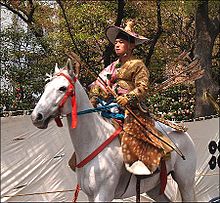 There are two famous schools of mounted archery that perform yabusame. One is the Ogasawara school. The founder, Ogasawara Nagakiyo, was instructed by the shōgun Minamoto no Yoritomo (1147–1199) to start a school for archery. Yoritomo wanted his warriors to be highly skilled and disciplined. Archery was seen as a good way for instilling the necessary principles for a samurai warrior.

Zen became a major element in both foot and mounted archery as it also became popular among the samurai in every aspect of their life during the Kamakura period.

Yabusame as a martial art helped a samurai learn concentration, discipline, and refinement. Zen taught breathing techniques to stabilize the mind and body, giving clarity and focus. To be able to calmly draw one's bow, aim, and shoot in the heat of battle, and then repeat, was the mark of a true samurai who had mastered his training and his fear.

The other archery school was begun earlier by Minamoto no Yoshiari in the 9th century at the command of Emperor Uda. This school became known as the Takeda school of archery. The Takeda style has been featured in classic samurai films such as Akira Kurosawa's "Seven Samurai" (1954) and "Kagemusha" (1980). The famed actor of many samurai films, Toshiro Mifune, was a noted student of the Takeda school.

With the arrival of the Portuguese and their guns in the mid-16th century, the bow began to lose its importance on the battlefield. At the Battle of Nagashino in 1575, well-placed groups of musketeers serving Oda Nobunaga and Tokugawa shot in volleys and practically annihilated the cavalry charges of the Takeda clan.

Mounted archery was revived in the Edo period (1600–1867) by Ogasawara Heibei Tsuneharu (1666–1747) under the command of the shogun Tokugawa Yoshimune (1684–1751). Given that the nation was at peace, archery as well as other military martial arts became more of a method of personal development rather than military training. 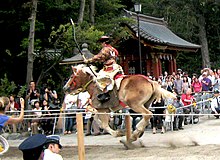 Yabusame is held at various times of the year, generally near Shinto shrines. On the 2nd Sunday of April every year, there is a Yabusame ceremony held at the Washibara Hachiman-gū shrine in Tsuwano, Shimane. At this ceremony, the Ogasawara school performs Yabusame at the oldest Yabusame Horse Archery range in Japan. In May, the Aoi Matsuri (Hollyhock festival) in Kyoto includes yabusame.[3] Other locations include Tsurugaoka Hachiman-gū in Kamakura, together with Samukawa and on the beach at Zushi.

Retrieved from "http://en.turkcewiki.org/w/index.php?title=Yabusame&oldid=1054746734"
This website is a mirror of Wikipedia, and is not affiliated with the Wikimedia Foundation.
Categories:
Hidden categories: