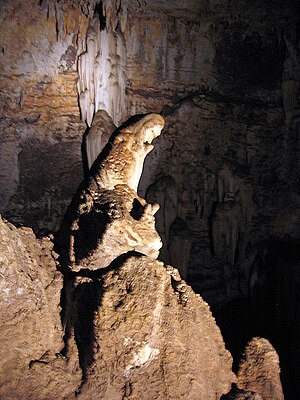 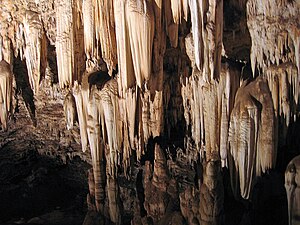 Stalactite and stalagmite formations in the Wonder Cave

It was discovered in the late nineteenth century by miners who dynamited and excavated limestone for the making of cement. Mining stopped during the Second Boer War, and never resumed.

The cave has about 14 stalactite and stalagmite formations up to 15 metres high, 85% of which are still growing. The 60-metre-deep cave is accessible to visitors by elevator, and is located within the Rhino and Lion Nature Reserve, in the Cradle of Humankind, a World Heritage Site.

Retrieved from "http://en.turkcewiki.org/w/index.php?title=Wonder_Cave_(Kromdraai,_Gauteng)&oldid=925136463"
This website is a mirror of Wikipedia, and is not affiliated with the Wikimedia Foundation.
Categories:
Hidden categories: