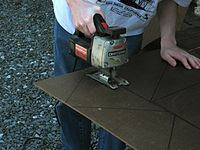 A Wikipedian prepares to do some cutting.

Content removal is the removal of part of an article's content that provides information without deleting the entire article. While the deletion of an entire page can be performed only via the deletion process (and ultimately completed by an administrator), deletion of part of a page can be accomplished by a single editor, even an unregistered editor, and can be done boldly. It is an editorial decision that can be easily reversed, and does not damage the edit history.

When removing a section of an article, it is necessary that it at least be explained, and in some cases, discussed. Unexplained removal of content is when the reason for the removal is not obvious, and is open to being promptly reverted.

Unexplained removal of one or more words in a manner that does not change the context need not be explained, though it is always a good idea to use at least the edit summary to describe changes except for the most minor edits.

A minor edit that removes one or more words or changes the amount of text in a negative direction is not considered to be content removal whatsoever, since it does not remove information. It will not likely be opposed, and need not be discussed in advance.

For example, if the text originally says the following:

There is an the fish in the bowl.

It is not grammatically correct, and should be changed to:

There is a fish in the bowl.

Though this edit removes one word and shortens another, everyone wants to see proper grammar, so there is no need to form a discussion.

There are various forms of content removal. When removing content from an article, whether it be a whole section or even just a single word, if the removal is likely to be opposed by one or more other editors, it is important to make sure there is clearly a consensus to remove the content. When in doubt, discuss prior to removal.

If you boldly make the removal, and it is then reverted by another editor, it is especially important that you discuss it prior to making a second removal.

The above examples show how removing just a small amount of text under these circumstances can change the meaning of what is stated. This does not mean it should never be done. It just means that when it is done, it should be done with a good reason, should be explained, and if need be, should be discussed with others.

It is not practical in this essay to show comparisons for larger amounts of text involving multiple paragraphs. But given how easily meaning can be changed in the above examples, how much more necessary is it to seek consensus when removing a full paragraph or section from an article?

There are various reasons for removing content from an article. Regardless of the reason, it should be described in the edit summary. If there is any doubt the removal may be controversial, or if it has been restored following a previous removal, it should be discussed on the page's talk page prior to removal.

Wikipedia's verifiability guidelines require all information to be citable to sources. When information is unsourced, and it is doubtful any sources are available for the information, it can be boldly removed.

If you think a source can be found, but you do not wish to supply one yourself, you can add the template {{fact}} ({{cn}} will also work) after the statement, which will add [citation needed]. This will encourage someone, often the editor who initially added the statement, to add a citation for the information.

Negative unsourced information about living people shall be removed immediately, as per Wikipedia's biographies of living people policy, without the use of such a template.

Information not attributed to a reliable source that is inaccurate beyond a reasonable doubt should be removed immediately. Unless it is clearly a blatant hoax, good faith shall be assumed and no action shall be taken against the editor who added this information, since that editor may have been given misinformation themself, or otherwise misunderstood

If there is a possibility that the information may be accurate, but there is uncertainty, add the template {{dubious}} after the statement. This will add [dubious - discuss] to the finished version, encouraging readers and editors to discuss the matter.

Inaccurate information not attributed to a reliable source about living people shall be removed immediately without the use of such a template.

Information moved to another article[edit]

It is sometimes necessary to move whole blocks of text from one article to another, when merging, splitting, or otherwise transferring. This can be performed as a bold decision.

Even if you intend to make the two edits one immediately after the other, you should still save the edit on the target page first.

The reason for this is that some time will pass between the two edits, and during that time, one may visit the target page looking for that information and not be able to find it.

You may expect the amount of time between the two edits to be very minimal. Still, there is a chance that one or more people may come to read the page during the small time frame. Some of the most popular articles are read thousands of times in a day. An article that is read 4320 times on one day is read on average every 20 seconds! And it may take longer between the two edits.

Even if the article is unpopular and the likelihood it'll be read during that time is very low, it is still necessary to save the target page first. Though it is possible no one will want to read that information during that brief period, you may personally get interrupted. For example, you may get a message from another editor and be distracted by that. You may get an email and be notified by your browser. You may get interrupted by a phone call or unexpectedly lose your internet connection. Any of these complications may render you unable to finish the dual-page editing operation for several hours or days, or may cause you to forget about it altogether.

Information that clearly has no relevance to the subject named in the article should be removed. For example, if in the article tiger you find one or more paragraphs about light bulbs, and there is no explanation from the text as to why this is there, it should be removed. If the text does appear to belong in another article, it can and probably should be moved there. If the information has some connection to the article, but it is not significantly relevant (e.g., a recently added paragraph on England in the article on English literature), you may wish to move the content to the Talk page with a note explaining why you have relocated it.

Information that falls under any guideline listed under What Wikipedia is not or several other Wikipedia guidelines and has been added to an article can be boldly removed. This includes, but is not limited to:

Editors can remove information that they personally added, provided that it has not since been significantly changed or used to support other information in the article. Once it has been modified, or the text is valuable in supporting other information, it should not be removed without good reason.

If an edit war occurs between just two users over content, it shall be discussed in hopes of a settlement from among the community.

It is preferable that good-faith additions remain in the article pending consensus unless:

Material clearly not added in good faith should be removed pending consensus.

If there are two editors who have a dispute over the presence of content, either can be guilty of a three-revert rule violation if they engage in an edit war. If a second editor steps in on one side, and two editors outnumber one, the reverts count collectively in the three-revert rule.

Still, consensus is not based on votes. This is just an example, and does not constitute permanent resolution. If, in a discussion, 10 editors support one side, and 7 support another, this does not mean the side with 10 automatically wins. It is necessary in such a discussion not just to cast a vote, but to give a good reason for your point-of-view. It may be necessary to turn to Dispute resolution to resolve the issue.

It is also important to remember that nothing is in stone and consensus can change. If consensus was decided one way a while back, it could be very different months, weeks, or even days later.

Retrieved from "http://en.turkcewiki.org/w/index.php?title=Wikipedia:Content_removal&oldid=1021383009"
This website is a mirror of Wikipedia, and is not affiliated with the Wikimedia Foundation.
Categories: