Jump to navigation Jump to search
This article is about a specific horse show competitive event. For the general topic, see Western riding. 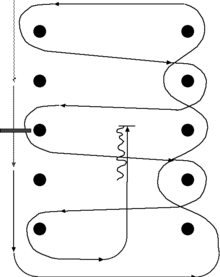 Western Riding is a competitive event at American horse shows, particularly those for stock horse breeds such as the American Quarter Horse. It is not to be confused with the general term "western riding," referring to the many forms of equestrianism where riders use a western saddle; instead, it refers to a particular class where the horse and rider complete a pattern that incorporates elements of both reining and trail classes, but requiring horses to perform in a quiet style akin to that of a Western pleasure class. Horses are evaluated on “quality of gaits, lead changes at the lope, response to the rider, manners and disposition."[1] While all three gaits are required, most of the pattern is performed at a lope. Emphasis is placed on the horse's smoothness, even cadence, and precise, clean flying lead changes.

Lead changes are the most important part of competition, though they are not all that the horse is judged on. All lead changes are to be precise, performed in the center of the markers in the designated lead change area, switching both front and hind leads simultaneously while maintaining frame and composure. The horse is to be responsive and quiet.

Pattern One from the AQHA Hand Book Show Rules 453B Western Riding can be described as follows: The horse enters the ring at a walk. It passes the starting cone and continues walking a few strides before jogging. It is traveling down a long side of the arena. Once it jogs, it jogs over the log, which has cones placed to either side of it. Once it has crossed the log and all four feet are on the second side of the log the horse picks up a lope. It lopes around the short end of the arena passing a cone on its left. Now the horse is moving down the second long side of the arena. Once it has passed the cone, it moves left switching its lead to the right lead. The horse passes the next cone on its right and starts shifting right switching its lead to the left. The horse will continue on this shallow serpentine through the cones for four loops completing the four line changes.

Effectively about half of the pattern is completed. Next, the horse will continue on his left lead down the second short end of the arena turning at another cone for a 180-degree turn at a lope. It will cross the arena completely making a lead change in the middle between the last cone and the next cone. Passing this cone on its right the horse will do another 180-degree at a lope continuing this large serpentine pattern around the cones for a total of four lead changes all completed around the centerline of the arena. During the large serpentine, the horse will lope over the log while loping around the cone. Once the horse has completed all the lead changes, it will pass its last cone on the left. Now it will do a 270-degree circle loping up the centerline of the arena. It will halt in line with the cones at the center of the pattern backing.

The scoring method is very similar to that of reining. The scores will be on a scale of 0–100 with a 70 being an average score basis. Points are added or subtracted based on credits or faults observed.[2]

center point and between the markers

feet) at the lope

stopping when called for in the pattern, within 10 feet (3 meters) of the designated area

when correcting an extra change or incorrect lead)

30 feet (9 meters) after crossing the log at the jog

(11) Faults, which will be cause for disqualification, except in novice amateur or novice youth classes, which shall be faults scored according to severity:

the nose is carried behind the vertical consistently.

should be judged accordingly in maneuver scores

nose is carried behind the vertical

Credit is given for

Retrieved from "http://en.turkcewiki.org/w/index.php?title=Western_riding_(horse_show)&oldid=1056102337"
This website is a mirror of Wikipedia, and is not affiliated with the Wikimedia Foundation.
Categories: