A cowboy of the old west in classic regalia

Western riding is considered a style of horse riding which has evolved from the ranching and welfare traditions which were brought to the Americans by the Spanish Conquistadors, as well as both equipment and riding style which evolved to meet the working needs of the cowboy in the American West. At the time, American cowboys had to work long hours in the saddle and often over rough terrain, sometimes having to rope a cattle using a lariat, also known as a lasso.[1] Because of the necessity to control the horse with one hand and use a lariat with the other, western horses were trained to neck rein, that is, to change direction with light pressure of a rein against the horse's neck. Horses were also trained to exercise a certain degree of independence in using their natural instincts to follow the movements of a cow, thus a riding style developed that emphasized a deep, secure seat, and training methods encouraged a horse to be responsive on very light rein contact.

Though there are significant differences in equipment, there are fewer differences between English and Western riding than appear at first glance. When comparing Western riding or English riding, the first, and biggest difference is the saddles used. The Western saddle is designed to be larger and heavier than an English saddle, which is designed to be smaller and lighter. The western saddle allows the weight of the rider to be spread over a larger area of the horse's back which makes it more comfortable, especially for long days chasing cows. The English saddle, however, is designed to allow the rider to have closer contact with the horse's back (Wilson, 2003).[2]

Another difference is that English riding involves the rider having direct contact with the horse's mouth via reins and the reins are used as part of an “aid.” In western riding, however, horses are mainly ridden with little to no contact with the riders using their seat, weight and neck reining to give aid or instructions in direction, etc., to the horse. In both Western and English riding, however, involve the rider sitting tall and straight in the saddle with their legs hanging naturally against the horse's sides as well as their arms relaxed and against their side, but not flapping, which is frowned against (Wilson, 2003).[2]

"Western Riding" is also the name for a specific event within western competition where a horse performs a pattern that combines trail and reining elements.

A western-style bridle with a browband and decorative snaffle bit 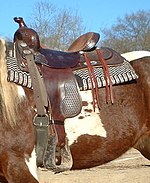 A horse wearing a bosal hackamore 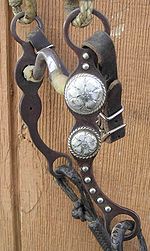 Detail of a western curb bit 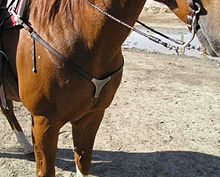 A breast collar, used to help keep the saddle from slipping. This refined design is suitable for show, working horses wear a heavier design

A set of romal style reins

A set of split reins

Today's western saddles have been greatly influenced by the Spanish Vaquero who were Cowboys. When the first saddle was developed, it didn't have a horn which was later invented by the Spanish and Mexican vaqueros (Kelly, 2011).[3] The needs of the cowboy's job required different tack than was used in "English" disciplines. Covering long distances, and working with half-wild cattle, frequently at high speeds in very rough, brushy terrain, meant the ever-present danger of a rider becoming unseated in an accident miles from home and support. Thus, the most noticeable equipment difference is in the saddle, which has a heavy and substantial tree (traditionally made of wood) to absorb the shock of roping. The western saddle features a prominent pommel topped by a horn that came about through trial and error for developing an efficient way of towing livestock (Kelly, 2011).[3] The horn is the easiest way to identify a western saddle. It allows the rider support and can be used for a lasso or other equipment (Gen, 2011).[4] The western saddle also consist of a deep seat and a high cantle. Depending on the local geography, tapaderos ("taps") cover the front of the stirrups to prevent brush from catching in the stirrups. Cowboy boots have somewhat more pointed toes and higher heels than a traditional work boot, modifications designed to prevent the rider's foot from slipping through the stirrup during a fall and being dragged.

To allow for communication with the horse even with a loose rein, the bridle also evolved. The biggest difference between "English" and "Western" bridles is the bit. Most finished "Western" horses are expected to eventually perform in a curb bit with a single pair of reins that has somewhat longer and looser shanks than the curb of an English Double bridle or a pelham bit. Different types of reins have developed over the years. Split reins, which are the most commonly used type of rein in the western industry, Mecates, which are a single rein that are used on California hackamores, Romal reins, also known as romals, which is a type of rein that has two distinct and balanced parts which are the reins and romal connected with a short strap and roping reins which are a single rein that varies in length and is often used in roping and other speed events (Tack, 2017).[5] Young horses are usually started under saddle with either a simple snaffle bit, or with the classic tool of the vaquero, the bosal-style hackamore.

The clothing of the Western rider differs from that of the "English" style dressage, hunt seat or Saddle seat rider. Practical Western attire consists of a long-sleeved work shirt, denim jeans, boots, and a wide-brimmed cowboy hat. Usually, a rider wears protective leather leggings called "chaps" (from the Spanish chaparajos; often pronounced "shaps") to help the rider stick to the saddle and to protect the legs when riding through brush. Clean, well-fitting work clothing is the usual outfit seen in rodeo, cutting and reining competitions, especially for men, though sometimes in brighter colors or finer fabrics.

Some competitive events may use flashier equipment. Unlike the English traditions where clothing and tack is quiet and unobtrusive, Western show equipment is intended to draw attention. Saddles, bits and bridles are frequently ornamented with substantial amounts of silver. The rider's shirt is often replaced with a jacket, and women's clothing, in particular, may feature vivid colors and even, depending on current fads, rhinestones or sequins. Hats and chaps are often color-coordinated, spurs and belt buckles are often silver-plated, and women's scarf pins and, when worn, men's bolo ties are also ornamented with silver or even semi-precious gemstones.

Competition for western riders at horse shows and related activities include in the following events:

Western equitation (sometimes called western horsemanship, stock seat equitation, or, in some classes, reining seat equitation) competitions are judged at the walk, jog, and lope in both directions. Riders must sit to the jog and never post.

In a Western equitation class a rider may be asked to perform a test or pattern, used to judge the rider's position and control of the horse. Tests may be as simple as jogging in a circle or backing up, or as complex as a full reining pattern, and may include elements such as transitions from halt to lope or lope to halt, sliding stops, a figure-8 at the lope with simple or flying change of lead, serpentines at the lope with flying changes, the rein back, a 360-degree or greater spin or pivot, and the rollback.

Riders must use a western saddle and a curb bit, and may only use one hand to hold the reins while riding. Two hands are allowed if the horse is ridden in a snaffle bit or hackamore, which are only permitted for use on "junior" horses, defined differently by various breed associations, but usually referring to horses four or five years of age and younger. Horses are not allowed to wear a noseband or cavesson, nor any type of protective boot or bandage, except during some tests that require a reining pattern.

The correct position for this discipline, as in all forms of riding, is a balanced seat. This is seen when a bystander can run an imaginary straight line that passes through the rider's ear, shoulder, hip, and heel. This means the rider's feet and legs must hang directly in balance so that the heel hits this line, with heels down. The rider should also be sitting as straight as possible, but with their hips under their body, sitting firmly on their seat bones, not sitting on one's crotch with an arched back. The rider should have their weight sunk into their seat and distributed through their legs. The rider's shoulders should be rolled back and their chin up to show that they are looking forward.

The western style is seen in a long stirrup length, often longer than even that used by dressage riders, an upright posture (equitation riders are never to lean forward beyond a very slight inclination), and the distinctive one-handed hold on the reins. The reining hand should be bent at the elbow, held close to the rider's side, and centered over the horse's neck, usually within an inch of the saddle horn. Due to the presence of the saddle horn, a true straight line between rider's hand and horse's mouth is usually not possible. Common faults of western riders include slouching, hands that are too high or too low, and poor position, particularly a tendency to sit on the horse as if they were sitting in a chair, with their feet stuck too far forward. While this "feet on the dashboard" style is used by rodeo riders to stay on a bucking horse, it is in practice an ineffective way to ride.

Retrieved from "http://en.turkcewiki.org/w/index.php?title=Western_riding&oldid=1021336530"
This website is a mirror of Wikipedia, and is not affiliated with the Wikimedia Foundation.
Categories:
Hidden categories: