Jump to navigation Jump to search
Geographic region of the U.S. state of North Carolina

The counties most commonly associated with Western North Carolina.

Western North Carolina (often abbreviated as WNC) is the region of North Carolina which includes the Appalachian Mountains; it is often known geographically as the state's Mountain Region. It contains the highest mountains in the Eastern United States, with 125 peaks rising to over 5,000 feet (1,500 meters) in elevation. Mount Mitchell at 6,684 feet (2,037 meters), is the highest peak of the Appalachian Mountains and mainland eastern North America. Western North Carolina is sometimes included with upstate South Carolina as the "Western Carolinas", which is counted as a single media market. The population of the region, as measured by the 2010 U.S. Census, is 1,473,241, which is approximately 15% of North Carolina's total population.

Located east of the Tennessee state line and west of the Piedmont, Western North Carolina contains few major urban centers. Asheville, located in the region's center, is the area's largest city and most prominent commercial hub. The Foothills region of the state is loosely defined as the area along Western North Carolina's eastern boundary; this region consists of a transitional terrain of hills between the Appalachians and Piedmont Plateau of central North Carolina.

The term Land of the Sky (or Land-of-Sky) is a common nickname for this mountainous region and has been more recently adopted to refer to the Asheville area. The term is derived from the title of the novel, Land of the Sky (1876), written by Mrs. Frances Tiernan, under the pseudonym Christian Reid. She often refers in this book to the Great Smoky Mountains and Blue Ridge Mountains, the two main ranges in Western North Carolina. The Asheville area regional government body, the Land-of-Sky Regional Council, also uses this nickname. Areas in the northwest portion of the region, including Boone and Blowing Rock, commonly use the nickname "The High Country", rather than "Land of the Sky."

The federally recognized Eastern Band of Cherokee Indians (EBCI) have a reservation in this region known as Qualla Boundary; it is situated adjacent to the Great Smoky Mountains National Park. Their capital is at Cherokee, North Carolina. This region, taking in today's southeastern Tennessee, western North and South Carolina, and northeastern Georgia, is considered the homeland of the historic Cherokee. Many of the people were forcibly removed in the late 1830s in the Trail of Tears to Indian Territory, but others remained; their descendants make up the EBCI, among the largest of recognized tribes. Sixteen earthwork mounds or their sites, built by indigenous peoples, have been listed in state archeological records in the eleven westernmost counties. Archeological and related research in the early 21st century has revealed that there may be as many as 50 such prehistoric mounds in this area, which were long central to Cherokee towns and culture.[1]

The Biltmore Estate outside Asheville

The southwestern and far west part of Western North Carolina all lie within the Appalachian Mountain chain. Mt. Mitchell, the highest peak in the state, as well as eastern North America, is located here. Asheville is the major urban hub of far western North Carolina. This area also includes a few hydroelectric projects managed by the Tennessee Valley Authority, including Fontana Dam. Tourism, especially outdoor ventures such as canoeing, whitewater rafting, camping, and fishing are important for many local economies.

The northern counties in Western North Carolina are commonly known as the state's High Country.[2] Centered on Boone, the High Country has the area's most popular ski resorts, including Ski Beech, Appalachian Ski Mountain, and Sugar Mountain.[3] The area also features such attractions, historical sites, and geological formations as Linville Caverns, Grandfather Mountain, and Blowing Rock. Education, skiing, tourism, and Christmas tree farming are among this area's most prominent industries, although agriculture and raising livestock also remain important.[3] The counties that make up the High Country are: Alleghany, Ashe, Avery, Mitchell, Watauga, Wilkes, and Yancey.[4]

The Foothills is a region of transitional terrain between the Piedmont Plateau and the Appalachian Mountains, extending from the lower edge of the Blue Ridge escarpment into the upper Catawba, Yadkin, Broad, Saluda, and Savannah River valleys. The eastern slopes of the Blue Ridge drop sharply to the foothills section, going from 3,500–4,000 feet (1,000–1,200 m) at the top to 1,000–1,500 feet at the base. The foothills region contains numerous lower peaks and isolated mountain ranges, such as the South Mountains, Brushy Mountains, and Stone Mountain State Park. The foothills are divided into many small river and creek valleys where much of the region's population lives. Although no large cities are located in the foothills, the subregion contains many smaller cities and towns.

These towns were often developed by European Americans around a single industry, such as furniture or textiles, which depended on local waterpower as their energy sources. Since the late 20th century, many of these industries and their associated jobs have moved offshore to other countries due to globalization, although they still remain prevalent in some areas. The foothills towns that depended upon them economically, often suffered from job and population losses. Some areas of the foothills are developing newer economies, including manufacturing, food distribution, utilities, and health care. Many farmers in the northern foothills are poultry farmers. Vineyards have been developed, along with associated winemaking and popular retail.

Among the towns of the foothills region are: Elkin, Forest City, Glen Alpine, Granite Falls, Hudson, Lake Lure, Rutherfordton, Spindale, Tryon, and Valdese; and the cities of Hickory, Lenoir, Marion, Mount Airy, Shelby, and Morganton. "The southern mountains" refer to the counties bordering South Carolina. The cities/towns of Hendersonville, Brevard, and Columbus are within this area.

The region has three major public universities: Appalachian State University in Boone, Western Carolina University in Cullowhee, and UNC Asheville in Asheville. All three are part of the University of North Carolina system.

US 421, a multi-lane expressway, is the major highway in the northwestern part of the state. US 19, US 23, US 64, US 74, and US 441 are the major highways in the far western part of the region. US 70 runs east through the area, connecting Hickory and Asheville. US 221 also runs through the area. This highway, which begins in Perry, Florida, connects the town of Rutherfordton to Jefferson. US 321 runs north from Hickory to Watauga and Avery counties before entering Tennessee.

The Blue Ridge Parkway, a National Scenic Byway that is 469 miles long, runs through western North Carolina, starting in Virginia and ending near the Great Smoky Mountains National Park.

Tourism is a major part of the economy in the area, which contains half of the Great Smoky Mountains National Park as well as the Nantahala and Pisgah national forests. Several lakes and dams are scattered throughout Western North Carolina, such as Lake Lure and Fontana Dam. Many visitors travel to the region every summer and autumn from major cities to escape hot weather elsewhere and see the leaves change colors. The timber industry is also a major economic sector. 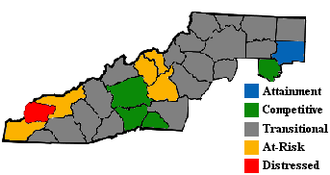 The Appalachian Regional Commission was formed in 1965 to aid economic development in the Appalachian region, which was lagging far behind the rest of the nation on most economic indicators. The Appalachian region, as currently defined by the Commission, includes 420 counties in 13 states, including 29 counties in North Carolina. The Commission classifies each county according to five economic qualifications— distressed, at-risk, transitional, competitive, or attainment. "Distressed" counties are considered the most economically endangered and "attainment" counties are the most economically prosperous. The three indicators used for such classification are three-year average unemployment rate, market income per capita, and poverty rate.[6]

The changes brought by increased tourism and population growth from retirees and persons migrating to the region have been double-edged. Local businesses have benefited from increased economic revenue, but increases in costs of living and loss of natural habitat to development, can degrade the quality of life for which the region has become notable. 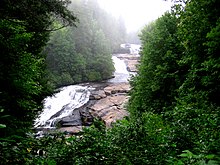 Western North Carolina is generally considered to consist of 23 counties.[8]

The counties commonly included in the region are as follows:

Other counties that fall under various definitions of Western North Carolina include: Alexander County, Catawba County, Cleveland County, Surry County and Yadkin County. When these counties are added, they form a total regional area of roughly 11,750 square miles (30,430 km²). This makes the region roughly the size of Massachusetts. 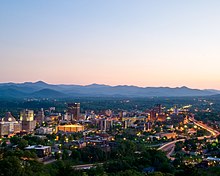 Listed below are communities often considered to be a part of Western North Carolina: 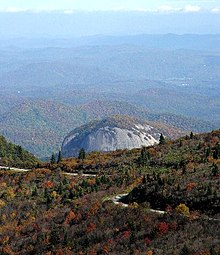 Retrieved from "http://en.turkcewiki.org/w/index.php?title=Western_North_Carolina&oldid=1082934056"
This website is a mirror of Wikipedia, and is not affiliated with the Wikimedia Foundation.
Categories:
Hidden categories: