Jump to content
1992 novel by Nicholson Baker
For the 2003 novel by Paul Stewart and Chris Riddell, see Vox (Stewart and Riddell novel). 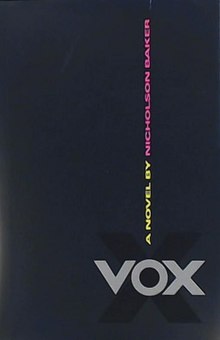 Vox is a 1992 novel by Nicholson Baker. Unusually for a literary novel, Vox enjoyed several weeks on the New York Times best-seller list.[1]

On the release of Vox, Publishers Weekly declared it was "unaccountably self-indulgent" and that "Baker's inestimable gift, evinced in the other books, for describing the indescribable with absolutely spot-on flourishes are nowhere to be found in Vox."[2] For The Village Voice, it "simply ushers us into the back pages of a glossy magazine", whereas The New York Times Book Review found it "a compelling and irresistible take, a tour-de-force illustration of the fantasy inherent in eroticism."[3] For James Kaplan, writing in Vanity Fair, "the book achieves between its two geographically distanced protagonists the kind of intimacy that all of us, from Bible-thumpers to leather fanciers yearn for. Vox is that rarest of rarities: a warm turn on".[4]

Retrieved from "http://en.turkcewiki.org/w/index.php?title=Vox_(Nicholson_Baker_novel)&oldid=1130180082"
This website is a mirror of Wikipedia, and is not affiliated with the Wikimedia Foundation.
Categories:
Hidden categories: