The Valyrian languages are a fictional language family in the A Song of Ice and Fire series of fantasy novels by George R. R. Martin, and in their television adaptation Game of Thrones.

In the novels, High Valyrian and its descendant languages are often mentioned but not developed beyond a few words. For the TV series, language creator David J. Peterson created the High Valyrian language, as well as the derivative languages Astapori and Meereenese Valyrian, based on fragments from the novels.[1] Valyrian and Dothraki have been described as "the most convincing fictional tongues since Elvish".[2]

"I am Daenerys Stormborn of the House Targaryen, of the blood of Old Valyria. Valyrian is my mother tongue."

In the world of A Song of Ice and Fire, High Valyrian occupies a cultural niche similar to that of Classical Latin in medieval Europe.[4] The novels describe it as no longer being used as a language of everyday communication, but rather as a language of learning and education among the nobility of Essos and Westeros, with much literature and song composed in Valyrian. 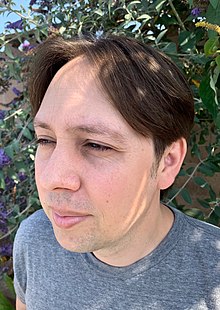 David J. Peterson, creator of the spoken Valyrian languages for Game of Thrones

To create the Dothraki and Valyrian languages to be spoken in Game of Thrones, HBO selected the language creator David J. Peterson through a competition among conlangers. The producers gave Peterson a largely free hand in developing the languages, as, according to Peterson, George R. R. Martin himself was not very interested in the linguistic aspect of his works.[4] The already published novels include only a few words of High Valyrian, including valar morghulis ("all men must die"), valar dohaeris ("all men must serve") and dracarys ("dragonfire"). For the forthcoming novel The Winds of Winter, Peterson has supplied Martin with additional Valyrian translations.[4]

Peterson commented that he considered Martin's choice of dracarys unfortunate because of its (presumably intended) similarity to the Latin word for dragon, draco. Because the Latin language does not exist in the fictional world of A Song of Ice and Fire, Peterson chose to treat the similarity as coincidental and made dracarys an independent lexeme;[5] his High Valyrian term for dragon is zaldrīzes. The phrases valar morghulis and valar dohaeris, on the other hand, became the foundation of the language's conjugation system.[4] Another word, trēsy, meaning "son", was coined in honour of Peterson's 3000th Twitter follower.[6]

Peterson did not create a High Valyrian writing system at the time, but he commented that he "was thinking something more like Egyptian's system of hieroglyphs—not in style, necessarily, but in their functionality. Egyptians had an alphabet, of sorts, a couple of phonetically-based systems, and a logography all layered on top of one another."[7] In the third season's episode "The Bear and the Maiden Fair", Talisa is seen writing a Valyrian letter in the Latin alphabet, because according to Peterson, "it didn't seem worthwhile to create an entire writing system for what ultimately is kind of a throwaway shot".[8]

Vowels with a macron over them (ī, ȳ, ū, ē, ō and ā) are long, held for twice as long as short vowels. Some words are distinguished simply by their vowel length in High Valyrian. The rounded vowels ⟨ȳ⟩ and ⟨y⟩ may not be pronounced in modern High Valyrian, as a non-native or prestige language and did not survive into the descendant languages. As a result, while Daenerys Targaryen's first name may generally be pronounced [də.ˈnɛː.ɹɪs] by characters in Game of Thrones, in High Valyrian it would have been closer to [ˈdae.ne.ɾys], with a diphthong in the first syllable and a rounded vowel in the last. The long vowels have also been lost in some derived languages; in season 3 of Game of Thrones, we hear Astapori Valyrian, from which all long vowels have been lost.[10]

There are four grammatical numbers in High Valyrian—singular, plural, paucal and collective. For example:

The collective can itself be modified by number as a new noun declension, for example:

Nouns have eight cases—nominative, accusative, genitive, dative, locative, instrumental, comitative and vocative, though the instrumental and comitative are not distinguished in all declensions,[14] nor are the genitive, dative and locative always distinguished in the plural.[6] Both prepositions and postpositions are used to form other cases; for example, the ablative is formed with the preposition hen + the locative (e.g. hen lentot, "from a house") while the superessive is formed with the postposition bē following the genitive (e.g. lento bē, "on top of a house").[16]

There are four grammatical genders, which do not align with biological sex.[17] The Valyrian names for the genders are:[18]

Animate and individuatable nouns are generally in the lunar or solar classes, while other nouns are generally classified as terrestrial or aquatic. The names of the classes derive from the nouns themselves, which are prototypical members of each gender.[18] Peterson describes Valyrian gender as being inherent but more predictable from phonology than gender in French, with some of the derivational properties of the noun classes of Bantu languages.[18] As a result of the phonological predictability, many words for humans (which tend to end -a or -ys) are lunar or solar; many foods and plants (often ending -on) are terrestrial.[19]

According to Peterson, "what defines declension classes in High Valyrian" can be divined by paying "close attention to the singular and plural numbers" and noting "where cases are conflated and where they aren't".[20] In the following tables, adjacent case conflations are merged into the same table cell; other cases that share a form with another are underlined.

Nouns have four grammatical numbers, but verb conjugations have only been described in the singular and the plural;[20] paucals trigger plural agreement and collectives trigger singular agreement.[21] There are two paradigms of verbs, those with a stem ending with a consonant and those with a stem ending with a vowel;[20] the tables below show examples of four tenses in the active voice. It is possible to tell which paradigm is in use from the first person plural indicative—consonant stems will always end in -i, whereas vowels stems will end in -ī.[20] Verbs with stems ending in a vowel follow a pattern where that stem-terminal vowel might change—-a and -i do not change, -e becomes -i, but -o and -u both become -v.[20] Verb stems may never end in a long vowel or a diphthong.[20] There is a subjunctive mood that is not only used in subordinate clauses, but also in all negative statements.[22]

Class I adjectives decline differently for each of the four noun classes.[24] The exemplar is kasta, meaning "blue and green".[24] As before, in the following tables, adjacent case conflations are merged into the same table cell; other cases that share a form with another are underlined.

a. See note about consonant harmony assimilation above.

Adjective classes II and III both conflate rather more forms, failing to distinguish between solar and lunar nouns and failing to distinguish between terrestrial and aquatic nouns.[24] Class II also has some subclasses, that have not yet been detailed.[24] The exemplars used here are the class II adjective adere ("sleek, smooth, slippery, fast, quick") and the class III adjective ēlie ("first").[24]

Class III adjectives also experience vowel changes when subject to the elision described above. When a lunar or solar form is elided to a syllable containing -ȳ- (such forms are highlighted in the table below), this -ȳ- mutates to -io-; this does not occur with terrestrial or aquatic forms. Compare:[24]

On October 31, 2016 a course in High Valyrian for English speakers began to be constructed in the Duolingo Language Incubator. David J. Peterson is one of the contributors to the course.[25][26] The beta version was released on July 12, 2017.[25][26] In April 2019, the course was updated in anticipation of Game of Thrones' eighth and final season.[27] As a part of this update, Peterson created audio for the course's lessons and exercises.

In the world of the novel and TV series, the Nine Free Cities of Essos speak locally evolved variants of Valyrian known as Bastard Valyrian, described by the character Tyrion in A Dance with Dragons as "not so much a dialect as nine dialects on the way to becoming separate tongues".[28]

Peterson described the relationship between High Valyrian and Bastard Valyrian as being similar to that between Classical Latin and the Romance languages evolved from Vulgar Latin, or more accurately between Classical Arabic and the modern varieties of Arabic, in that High Valyrian is intelligible, with some difficulty, to a speaker of a local Essoan language.[3]

The slave cities of Slaver's Bay are lands of the ancient Ghiscari Empire that was conquered and annexed by Valyria, so they speak related languages descended from High Valyrian with the substrate of the local Ghiscari languages.[29] Peterson noted that with regard to the vocabulary of the derived languages, "If it’s got a 'j' in an odd place, it’s probably Ghiscari in origin."[30]

"And this because I like the curve of her ass."

The first derivative Valyrian language to be featured in the series was Astapori Valyrian, a variety from the city of Astapor in Slaver's Bay. It appeared in the third-season premiere episode "Valar Dohaeris". Peterson created the Astapori dialogue by first writing the text in High Valyrian, then applying a series of regular grammar and sound changes to simulate the changes in natural languages over a long period of time.[32]

"You want to drink wine with these men? The men who tore us from our mothers’ arms and sold us at auction, like cattle?"

Meereenese Valyrian appears in Seasons 4 and 6 of Game of Thrones.[36] Like Astapori Valyrian, it lacked long vowels as well as the sound /y/.[37] However, its phonology departs considerably more from High Valyrian; for example, "Unsullied" is Thowoá [θo.woˈa], whereas in High Valyrian it is Dovaogēdy [do.vao.ˈɡeː.dy] and in Astapori Valyrian it is Dovoghedhy [do.vo.ˈɣe.ði].[36][38]

Retrieved from "http://en.turkcewiki.org/w/index.php?title=Valyrian_languages&oldid=1077314662"
This website is a mirror of Wikipedia, and is not affiliated with the Wikimedia Foundation.
Categories:
Hidden categories: