Merchant born in Chennai, Tamil Nadu on 17 December 1975 to Ramesh Merchant and Hridaya Merchant. She is the granddaughter of choreographer B. Hiralal & the elder sister of Shruti Merchant.[2]

She began her career by assisting her uncle Chinni Prakash.[3] In 1999, she did her first solo work for the choreography of the song Dhol Baaje for the film Hum Dil De Chuke Sanam. She won the National Film Award for Best Choreography for her work.[4]

She had her acting debut in a Malayalam film Snehapoorvam Anna in 2000.

She took a short break from the industry and then returned with the song O Ri Chhori in the 2001 film Lagaan. She then choreographed Kajra Re from Bunty Aur Babli (2005) that fetched her several awards.[5] She continued to choreograph selected numbers in films such as Devdas, Baghban, Fida, Dhoom (As well as its two sequels), Veer Zaara, Aaja Nachle, Rab Ne Bana Di Jodi and Aiyyaa. She also choreographed the Australian musical The Merchants of Bollywood , a musical written by Toby Gough about her family.[6] 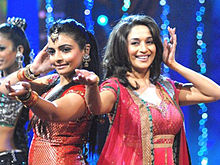 Merchant with Madhuri Dixit whom she choreographed in Aaja Nachle.

Wikimedia Commons has media related to Vaibhavi Merchant.
Retrieved from "http://en.turkcewiki.org/w/index.php?title=Vaibhavi_Merchant&oldid=1064033845"
This website is a mirror of Wikipedia, and is not affiliated with the Wikimedia Foundation.
Categories:
Hidden categories: