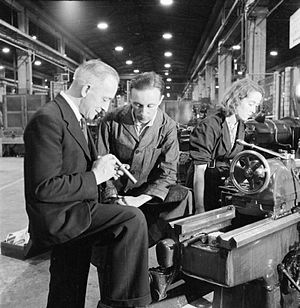 A union representative, union steward,[1] or shop steward is an employee of an organization or company who represents and defends the interests of their fellow employees as a labor union member and official. Rank-and-file members of the union hold this position voluntarily (through democratic election by fellow workers or sometimes by appointment of a higher union body) while maintaining their role as an employee of the firm. As a result, the union steward becomes a significant link and conduit of information between the union leadership and rank-and-file workers.

The duties of a union steward vary according to each labor union's constitutional mandate for the position. In general, most union stewards perform the following functions:

Unlike other union representatives, stewards work on the shop floor, connecting workers with union officials at regional or national levels.

The role of shop stewards may vary from being a mere representative of a larger national union towards independent structures with the power of collective bargaining in the workplace.

(a) The Home agrees to recognize such Union stewards, duly appointed by and acting as agents of the Union, who may receive complaints and process grievances through the grievance procedure. The Union shall provide the Home with a written list of such stewards and alternates, if any.

(b) Union stewards shall be permitted to use a reasonable amount of work time with pay, as approved in advance by the Administrator (which approval will not be unreasonably denied), for the purpose of handling and processing grievances.

(c) The Union steward shall not direct any worker how to perform or not perform their work, shall not countermand the order of a supervisor and shall not interfere with the normal operations of the Home or any other worker.

(d) The Home's designated representative shall be required to meet with only one Union steward and/or the Union Chairperson on any grievance.

The Union Chairperson(s) will be allowed up to four scheduled hours per week (or more if needed) with pay to handle matters under this contract, provided that it does not interfere with patient care or with the operating needs of the Home.

Retrieved from "http://en.turkcewiki.org/w/index.php?title=Union_representative&oldid=1040140214"
This website is a mirror of Wikipedia, and is not affiliated with the Wikimedia Foundation.
Categories:
Hidden categories: