Jump to content
Sealskin or caribou tent used by Inuit 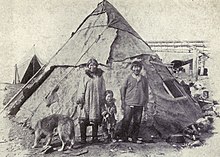 Inuit family with Malamute outside a tupik, ca. 1915

The tupiq[1] (plural: tupiit,[2] Inuktitut syllabics: ᑐᐱᖅ[3]) is a traditional Inuit tent made from seal[4] or caribou[5] skin. An Inuk was required to kill five to ten ugjuk[1][6] (bearded seals) to make a sealskin tent. When a man went hunting he would bring a small tent made out of five ugjuit. A family tent would be made of ten or more ugjuit.

After the bearded seal is killed, its fat is scraped off, then the skin is stretched to dry. Finally, women will sew it together to make a tent. Layers can be added by laying heather[7] on top of the outer skin and wrapping another skin around the tent.[8]

The tupiq was important traditionally, but is rarely used in modern times. Today most Inuit use canvas tents called tupikhaq.[1]

Retrieved from "http://en.turkcewiki.org/w/index.php?title=Tupiq&oldid=1132359804"
This website is a mirror of Wikipedia, and is not affiliated with the Wikimedia Foundation.
Categories:
Hidden categories: