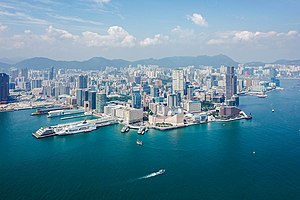 Tsim Sha Tsui, often abbreviated as TST, is an urban area in southern Kowloon, Hong Kong. The area is administratively part of the Yau Tsim Mong District.[1] Tsim Sha Tsui East is a piece of land reclaimed from the Hung Hom Bay now east of Tsim Sha Tsui. The area is bounded north by Austin Road and in the east by Hong Chong Road and Cheong Wan Road.

Geographically, Tsim Sha Tsui is a cape on the tip of the Kowloon Peninsula pointing towards Victoria Harbour, opposite Central. Several villages had been established in this location before Kowloon was ceded to the British Empire in 1860. The name Tsim Sha Tsui in Cantonese means sharp sandspit. It was also known as Heung Po Tau (香埗頭), i.e. a port for exporting incense tree.

Tsim Sha Tsui is a major tourist hub in Hong Kong, with many high-end shops, bars, pubs and restaurants that cater to tourists. Many of Hong Kong's museums are located in the area.[2]

The name Tsim Sha Tsui (Chinese: 尖沙咀) means 'sharp sandspit' in Cantonese. The traditional and archaic form of Tsim Sha Tsui in Chinese has the same pronunciation but is written differently (尖沙嘴).

Before any land reclamation, Tsim Sha Tsui consisted of two parallel capes with a bay in between in the south. The west cape, Kowloon Point, the proper Tsim Sha Tsui, coincided with the small hill where the Former Marine Police Headquarters is sited, while the east cape was the hill that is today known as Blackhead Point. The bay between the capes extended as far north as the present-day Mody Road. Today, Canton Road marks the western edge of Tsim Sha Tsui, and Chatham Road the eastern edge. The area is hilly, although many hills were levelled for reclamation. 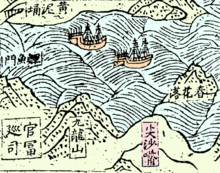 The position of Tsim Sha Tsui (pink) during Ming dynasty

Aerial view of Tsim Sha Tsui in early 20th century. The Kowloon station (low left corner), the former Marine Police Headquarters (on the hill inland behind the station), and the Peninsula Hotel (centre)

Historical maps in Ming or Qing dynasty named the channel between Tsim Sha Tsui and Central as Chung Mun (Pinyin: Zhong Men, 中門, lit. the middle gate) as it is located in the middle of the two other channels, Kap Shui Mun in the west and Lei Yue Mun in the east, in the harbour.

Before Kowloon was ceded to Britain in 1860, many villages were present in the area. Incense trees (Aquilaria sinensis) from New Territories were gathered at some quays in Tsim Sha Tsui and transferred to Shek Pai Wan in southern Hong Kong Island to be exported to rest of the world. It was thus known as Heung Po Tau, the fragrant quay. Shortly after the land was ceded to Britain, construction began on the first section of Tsim Sha Tsui's major thoroughfare, Nathan Road.

In 1888, the Star Ferry offered regular transport between Central and Tsim Sha Tsui, and the area has flourished ever since. Until the 20th century, Tsim Sha Tsui was a leafy suburb dominated by the people and facilities of the British military. Whitfield Barracks, converted into Kowloon Park in 1970, ran to the west of Nathan Road, and Kowloon Naval Yard occupied the waterfront to the west of the army encampment. In the early 20th century, Chinese people were allowed to live in the area to attract more people to trade in the colony. Garden houses were replaced with crowded residential blocks. Wharves and godowns were built along the west shore. Major developers like Hormusjee Naorojee Mody and Catchick Paul Chater actively participated in the development of Tsim Sha Tsui.

The Kowloon–Canton Railway (British Section) commenced service on 1 October 1910. Kowloon station in Tsim Sha Tsui was approved to be constructed on reclaimed land in 1912.[3] It was built on the new southern reclamation from 1913 to 1915. The rails extended along the western reclamation parallel to Chatham Road, with old Hung Hom station near the Gun Club Hill Barracks at the junction of Chatham Road and Austin Road. Another major road, Salisbury Road, was completed in approximately the same period. The landmark Peninsula Hotel was built on the reclamation in 1928, opposite to the station.

The Kowloon station was relocated to a new Hung Hom station in 1978. The whole station and rails were demolished except the landmark Clock Tower. Hong Kong Space Museum and later the Hong Kong Cultural Centre were erected on the site. The rails were replaced with New World Centre and other gardens in Tsim Sha Tsui East.

In 2016 the Tsim Sha Tsui Waterfront Revitalisation Plan was shelved due to public controversy. 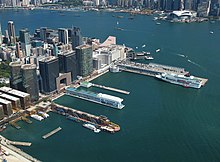 Tsim Sha Tsui remains tertiary sector from colonial days to present. In early colonial days, transport, tourism and trading are main business of the area. As port and rail facilities moved out of the area, the major industry falls on the later two. Tsim Sha Tsui, like Central, contains several centres of finance. After Kai Tak Airport closed, the height restrictions on buildings has dropped and now larger taller skyscrapers, parallel to those of Central, have been constructed.[4] 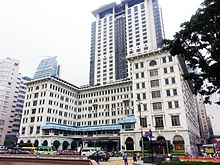 The Peninsula Hong Kong and its office towers.

Tourist hospitality is a major industry in Tsim Sha Tsui. The area has the highest concentration of hotels in Hong Kong. Some of the hotels include The Peninsula, Rosewood Hong Kong, Kowloon Shangri-La, InterContinental Hong Kong, The Mira Hong Kong, Baden-Powell International House, Hotel Icon, and the Hotel Panorama. The Hyatt Regency Hong Kong was closed on 1 January 2006 and the iSQUARE shopping mall was built at its former location. It has re-opened in October 2009 on Hanoi Road of Tsim Sha Tsui within the new The Masterpiece skyscraper. Other hotels in virtually every price range and level of luxury can be found throughout the area; Chungking Mansions is known for providing cheap lodging for backpackers. 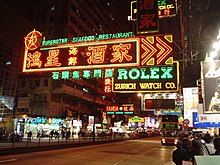 Tsim Sha Tsui is one of many places to find exotic restaurants in Hong Kong. Hillwood Road at the north of Observatory Hill concentrates on restaurants of different national dishes. Knutsford Terrace on the other side of the hill is a terrace of pubs. Kimberley Street is famous for the Korean cuisine restaurants and grocery stores, especially after the advent of Korean Wave (韓流) in Hong Kong, giving the street the nickname of Koreatown (小韓國). From there, a string of Korean restaurants are located on Austin Avenue which circles Observatory Hill. Located on Nathan Road, the Chungking Mansions is a major tourist attraction in Tsim Sha Tsui. Georgetown Parade is well known for its dog nose biscuits. These recognisable buildings were featured in the film Chungking Express, and are full of inexpensive guest houses, Indian restaurants, and money changers. 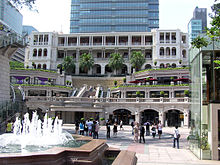 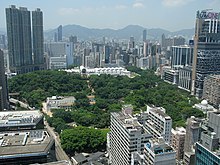 Tsim Sha Tsui is one of the main shopping areas in Hong Kong. Shopping malls in the area include:

The Park Lane Shopper's Boulevard is located along a section of Nathan Road. The flagship stores of several luxury brands are located in the Tsim Sha Tsui section of Canton Road. 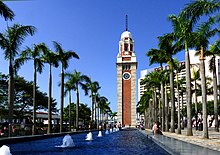 Tsim Sha Tsui was once the terminus of the Kowloon–Canton Railway (KCR). After the British Section of the railway was opened for traffic on 1 October 1910, the construction of the railway station in Tsim Sha Tsui started in 1913. Construction on the railway station and its clock tower were completed in 1915. The main building of the Tsim Sha Tsui station was demolished in 1978. The station was relocated to Hung Hom to make way for the Hong Kong Space Museum and the Hong Kong Cultural Centre. But the Clock Tower of the station was not demolished and was kept in place. It is all that remains standing of the station. The clock tower is forty-four metres high, surmounted by a seven-metre-high (23 ft) lightning rod. It is now surrounded by the public piazza of the Cultural Centre and has become a landmark of Hong Kong. Six pillars of the railway were relocated to the Urban Council Centenary Garden in TST East. The Avenue of Stars starts at the "New World Centre" shopping centre near the Cultural Centre. There is also the attraction of shopping at a clothing store frequented by famous people from all over the world, at Sam's Tailor.

The Tsim Sha Tsui waterfront is another popular destination for locals and tourists alike. It is especially popular for photographers, as it offers an unobstructed view of the Central area of Hong Kong across Victoria Harbour. The Star Ferry terminal is another popular attraction for tourists, and the Avenue of Stars is also popular with photographers.

East Tsim Sha Tsui is the last district in Hong Kong to use a grid plan system before the Hong Kong government adopted its high land price policy, meaning that development in East Tsim Sha Tsui is less centralised than in newer districts. It is characterised by a large number of mid-rise buildings including hotels, offices and shopping centres. Pedestrian plazas are located in between the buildings.[7]

Streets in Tsim Sha Tsui include: 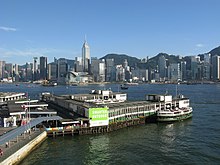 The Tsim Sha Tsui Pier of the Star Ferry, with Hong Kong Island in the background.

Since Tsim Sha Tsui is in the heart of Kowloon Peninsula, the area is served by an extensive network of bus routes to many parts of Hong Kong. There are major bus terminals beside the Star Ferry terminal and atop East Tsim Sha Tsui underground station on Chatham Road.

Other places in the area[edit]

Retrieved from "http://en.turkcewiki.org/w/index.php?title=Tsim_Sha_Tsui&oldid=1035889585"
This website is a mirror of Wikipedia, and is not affiliated with the Wikimedia Foundation.
Categories:
Hidden categories: