The North Carolina General Assembly apportioned Transylvania County on February 15, 1861, from lands previously attributed to neighboring Jackson and Henderson counties; it was named by representative Joseph P. Jordan.[3] Until the early 20th century, the vast majority of Transylvania County residents subsisted through agriculture, growing staples such as potatoes and cabbage.[4]

Beginning in the early 20th century, with Joseph Silverstein's tannery in what was renamed as Rosman in 1905, a manufacturing economy began to develop in the county. It relied on timber and related products harvested from the Pisgah National Forest. In the 1930s, Harry Straus opened a paper mill in the Pisgah Forest area; by the mid-20th century, Straus's Ecusta Paper manufacturing site provided jobs to over 3,000 local residents. During the peak industrial years of the 1950s, DuPont had a factory in the county, employing nearly 1,000 more residents.[4]

In the following decades, Brevard College and its namesake town each grew at dramatic rates. The Brevard Music Center and its summer Brevard Music Festival began to attract musicians and enthusiasts from around the country to Transylvania County.[4]

Since the late 20th century, Transylvania County's economy has changed. Many of the manufacturing operations went defunct or moved offshore for cheap labor, including Ecusta and DuPont. Since then, the county has worked to reshape its economy around the growing summer and winter tourism industry in Appalachia.[4] 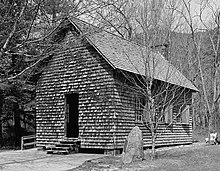 The Biltmore School of Forestry, founded in 1898, was the nation's first forestry school.

Transylvania County contains the primary headwaters of the French Broad River, locally called North Fork, West Fork, East Fork, and Middle Fork. Since the county's northern and western boundaries follow mountain ridges, all these tributaries originate from sources in the county. The French Broad flows primarily east and northward through the county into Henderson County.[6]

The county's northern border follows the ridge line proximate to the Blue Ridge Parkway, and the southern border mostly follows the Eastern Continental Divide, from the border of Henderson County and South Carolina, westward to near US 178 and Jackson County.[7] The headwaters of Lake Toxaway lie south of the Eastern Continental Divide, becoming the Toxaway River, descending rapidly through Gorges State Park and into Lake Jocassee on the county's southern edge. This area, known as the Cane Brake, is difficult to access from North Carolina due to the steep slope of the trails in Gorges State Park, but can be reached more easily via the Foothills Trail from South Carolina.[8]

Transylvania County is known as the "Land of Waterfalls", due to it having over 250 waterfalls. This is due to a combination of its high precipitation and location on the Blue Ridge Escarpment. Notable waterfalls in the county include Looking Glass Falls, Moore Cove Falls, Rainbow Falls, and Whitewater Falls, the tallest waterfall east of the Mississippi. It receives over 90 inches of rain annually due to orographic lift, making it the state's wettest county. (Buncombe County, 30 miles northeast, is the driest, as it sits in Transylvania County's rain shadow.) The Blue Ridge Parkway traverses parts of the county, and has views of the Appalachian Mountains, which reach over 6,000 feet (1,800 m) elevation in the county. The highest point, Chestnut Knob, 6,025 feet (1,836 m), lies northwest of Brevard.

At present Transylvania is a solidly Republican county, although much less so than the vast majority of Appalachia. No Democratic presidential nominee has carried Transylvania County since Jimmy Carter did so in 1976.

Transylvania Regional Hospital (TRH) was formed in 1933 with the mission to serve the community's health care needs. A 94-bed facility fully accredited by the Joint Commission on Accreditation of Healthcare Organizations (JCAHO), it has more than 120 active, consulting and courtesy physicians representing a full spectrum of specialties.

Transylvania County is a member of the Land-of-Sky Regional Council of governments. 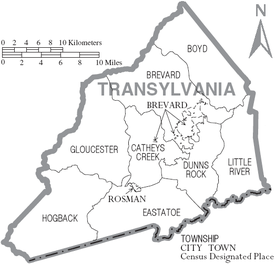 Wikimedia Commons has media related to Transylvania County, North Carolina.
Retrieved from "http://en.turkcewiki.org/w/index.php?title=Transylvania_County,_North_Carolina&oldid=1127816085"
This website is a mirror of Wikipedia, and is not affiliated with the Wikimedia Foundation.
Categories:
Hidden categories: